In a world driven by the dollar sign, D. Loy Stewart, Jr., owner and president of Detyens Shipyards missed the memo. Make no mistake, Stewart is steadfast to deliver on-time, excellent service to Detyens’ broad array of ship repair clients, from government to commercial, both foreign and domestic. He understands that a ship in his yard is not making its owner – his client –  money, and he is laser focused on keeping his clients happy, returning ships to service on time, on budget. But Stewart is driven by a calling larger than profit margin, building a successful U.S. ship repair business while sharing the rewards with his employees, their families and the local community.

Walk into the Detyens shipyard in Charleston, South Carolina, and you are immediately struck by a number of things. The reception area is packed with memorabilia – photos, trophies, awards and letters – that stand as a testament to the shipyards’ long-standing connection and commitment to its local community. Its owner, D. Loy Stewart, Jr. and his key staff are straight talking and genuine, confirmed by the golf cart tour through the yard, stopping innumerable times as employees reach out to chat with their boss.

Then there is the shipyard, which is huge, amply equipped to lift most anything that needs a lift, anytime, packed with the diversity of heavy machinery and modern finishing tools to get most any job done. It is also packed with a diverse array of government and commercial ships – both foreign and domestic – large and small, in for a fix to keep commerce humming. Around nearly every corner, inside every shop, investment is evident. Current investment in two massive hull and machinery shops, shops once occupied by the Charleston Naval Shipyard to build U.S. Navy ships to support the WWII effort. Investment in a modern paint and finish building to ensure that the job is done efficiently and safely. Investment in people, Stewart’s people, courtesy of a modern, free medical clinic on the shipyard’s property, open to employees and their families. In addition, there’s a bonus program for every shipyard employee based on performance throughout the year and delivered the week of Thanksgiving. This year each employee is scheduled to receive the equivalent of more than six weeks of pay. 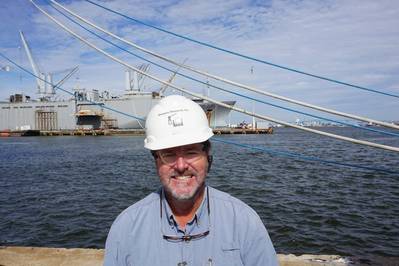 According to D. Loy Stewart, Jr., when Detyens reached the deal to move its ship repair business to the old Charleston Navy Shipyard, it was like “We went from the country fair to Disney World, with the best facility that taxpayer dollars could build.”

“My grandad Detyens and my grandmother, with no money, started the shipyard in 1962 … out in the country with wooden drydocks and wooden piers,” said Stewart. After 20 years in the business his grandfather sold the shipyard to his son and a partner,  still operating in a remote locale with dated equipment.
Then in 1995 everything changes.

“My dad and two partners put together a proposal to reopen the Charleston Naval Shipyard (which was closed when the Defense Department’s Base Realignment and Closure Commission announced the closure of the Naval Station Charleston), with Detyens doing the marine work,” said Stewart. He explains the switch of facilities simply as: “We went from the country fair to Disney World, with the best facility that taxpayer dollars could build.”

So started one of the most successful ship repair businesses in the U.S., a privately owned operation focused on what it knows best: ship repair.

“We simply decided we wanted to be the best ship repair facility in the country,” said Stewart.  We started slow, taking on only the work that we knew that we could deliver on time and on budget. We’ve built that business up to where we’re running wide open. Our drydocks are occupied between 85 to 90% of the time, half government and half commercial work. On the commercial side, half is domestic, half if foreign.”

Six years ago Stewart’s father, battling health problems, decided to sell the business to his three sons, with Loy taking the helm as president right around the same time Detyens celebrated its 50th anniversary.

Looking Ahead
While Stewart is mindful of the company’s history, he is adamant to plan for the future, which demands investment. To that end the company is moving its hull and pipe shop into massive buildings for formerly built Navy destroyers during WWII, and most recently have been used to build armored vehicles and as warehouse facilities. The move, according to Stewart, are aimed at attracting even larger jobs, and to situate the company to grow for another 50 years. 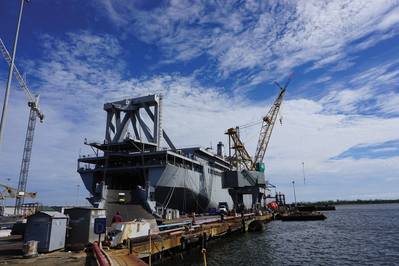 Detyens expands its facilities, grows its commercial ship repair operations, and invests in its employees, customers and facilities to prepare for the next 50 years. (Photo: Eric Haun)

“We’ve just recently had the opportunity to move into building two,” and while it’s empty right now, it is sized right for future growth. “We moved our hull and pipe shop into this building to plan for the next 50 years,” said Stewart. “This houses our hull and pipe shop in one building and will allow us to do much bigger jobs. There are two 25-ton overhead cranes in the plate bay that travel out to the plate yard. Then in the main construction bay there are two overhead 50-ton construction cranes.”

While heavy machinery is the muscle of any ship repair facility, skilled labor is the heart and soul, and like most in the business Stewart is in a perpetual search for employees who are willing and able to learn a trade.

“Also housed in our new hull and pipe shop is our new welding school,” said Steward, “so all of our new hires, our employees, or students that want to come in and learn have a school to teach them how to weld and get them certified to our procedures.”

Unique perhaps is Stewart’s willingness to train welders without an agreement to be employed at the shipyard for a period of time.

Focus on People
While many companies talk the “people” talk, Stewart and Detyens walk-the-walk. Twelve years ago the company opened the Detyens Medical Center where employees and their families can come, for free, staffed with a primary care physician, a pharmacy and full service from pediatrics to geriatrics. Stewart sees it as investment to his most valued resource – skilled employees – healthy and committed to the shipyard. “We are always trying to attract and retain employees, and healthcare is a big part of this,” said Stewart.

While Stewart aims to keep his employees happy, similarly he wants his yard to treat customers well, too, which was a reason the company stopped doing Navy work many years ago.

“Twenty years ago we were 90% navy work, and that’s all we knew, then the Navy moved out of town,” said Stewart. “When we reopened the Charleston Yard we still chased Navy work, but then we found that Navy work isn’t all that much fun. The general mood is to fight.”

So the management team set its course to be the best commercial ship repair yard that it could, with a balance of work that includes government vessels which Stewart notes are ABS classed and perform similarly to commercial ships. “Our job is create customers and friends,” said Stewart.

Like many in the business, Stewart is humble regarding his success, attributing it to three things: customers, employees and facilities. “You have to take care of all three, because if you don’t take care of one, the other two don’t matter.”