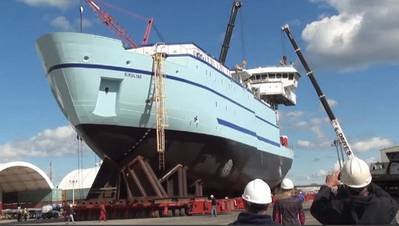 The 3,800-ton Alaska Region Research Vessel (ARRV) R/V Sikuliaq was launched on Oct. 13, 2012, at Marinette Marine in Marinette, Wis.  Sikuliaq (pronounced see-KOO-lee-ack) will be operated by the University of Alaska Fairbanks (UAF) School of Fisheries and Ocean Sciences for the National Science Foundation as part of the University-National Oceanographic Laboratory System (UNOLS) fleet.  The 261-foot global class ice-capable research vessel R/V Sikuliaq was designed by Glosten Associates.
"R/V Sikuliaq is one of the most advanced research vessels in the world," said NSF Director Subra Suresh. "Its capabilities to operate in extreme ecosystems will serve the science and engineering research communities for decades to come, while providing opportunities for educators and students to learn first-hand about the Arctic environment."
Sikuliaq is an Inupiat word meaning "young sea ice." "The name 'Sikuliaq' reflects both our Alaska heritage as well as our focus on arctic research," said UAF Chancellor Brian Rogers.
According to Gary Smith of UAF, the Sikuliaq project director, the ship will be available for science operations beginning in 2014. UAF's Seward Marine Center in Seward, Alaska, will be her home port.
The vessel will be uniquely equipped for operating in ice-covered waters, with a reinforced double hull, two rotating thrusters, and scalloped propeller blades enabling it to break through first-year ice up to 2.5 feet thick.
The integrated 5,750 HP diesel-electric plant features AC propulsion motors and tractor style Z-drives.
“Sikuliaq’s electric propulsion system makes it exceptionally quiet,” Smith said, “so it’s an ideal platform for acoustics research and observing marine life.”
The ARRV was designed to be environmentally friendly from the keel up, and to “Incorporate commercially available ‘Green Ship’ technologies to the maximum extent practicable without significantly impacting the cost of construction or the vessel’s daily rate,” with “particular attention…placed on alternate fuels and propulsion."
It’s also the most accessible research ship, built to ADA standards, with elevators, automatic door openers, handicapped accessible passageways and heads.
According to the NSF, Sikuliaq will operate year round in the challenging waters of the Chukchi, Beaufort, and Bering Seas, as well as in the open Gulf of Alaska, coastal Southeast Alaska, and Prince William Sound, including operations in seasonal ice of up to 3.9 ft. thick.  “R/V Sikuliaq will provide a sophisticated and significantly larger platform for scientists, graduate, and undergraduate students to participate in complex multidisciplinary research activities and will enable the training of the next generation of scientists with the latest equipment and technology. Broadband satellite communications capable of relaying data, including high definition video from tools such as remotely operated vehicles that explore under the ice and the ocean depths, will bring research into the K-12 classroom and to the general public.”
The ship is expected to conduct bottom mapping and coring studies.  “This is very important,” said Marc Willis, marine science technical director at Oregon State University and a member of the project office at Marinette.  “There’s not a lot that’s been done up there.”
The ARRV will also be outfitted with the latest technology for marine research, including a low underwater noise signature, advanced communications, acoustic sensors and advanced scientific equipment handling systems.  Willis said the ship will work in the high Arctic in the summer and the Bering Sea in winter.   In the spring it can operate along the ice edge to study the abundant variety marine life there. With inch-thick hull plates and a knife-edge bow for riding up and onto the ice, it will be the most ice-capable of the UNOLS fleet of 20 ships.  Designed for—but not restricted to—polar regions, the ship can be deployed for ocean research missions anywhere on the oceans that scientists need it to go.  “Sikuliaq will be equipped for the full range of oceanography study,” said Willis.  “It’s a science friendly vessel.”
Sikuliaq is the replacement for R/V Alpha Helix, which was 40 years of age at the time it was taken out of service in 2006 and the oldest ship in the National Academic Research Fleet.
Although managed and operated by UAF, missions are scheduled through UNOLS.  ”It’s not a UAF facility,” said Willis.  It’s a national resource.”
The ship was built with funding provided by NSF through the American Recovery and Reinvestment Act.  According to an NSF press release, NSF invested nearly $200 million into R/V Sikuliaq, which was the first and largest single award made using NSF's Recovery Act funds.


(As published in the December 2012 edition of Maritime Reporter - www.marinelink.com)