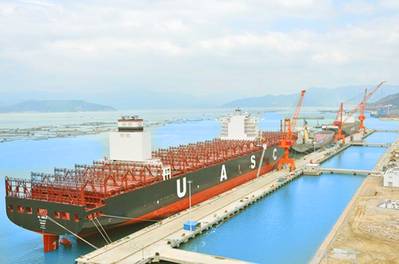 A new shipyard built in 2011, the Fujian Huadong shipyard is located on the northern side of Fujian Luoyuan Bay, a sheltered deep-water port in China. It’s centrally positioned on the eastern seaboard of China, equidistant from Shanghai and Guangzhou and northwest of Taiwan, well placed for many of the most popular Asian sea routes. It has the additional advantage of having a very reasonable climate and not suffering from the extreme cold (and resulting delays to work progress) of the Shanghai winter, or the tropical heat which hampers work in yards further south.

Fujianhas an international customer base with fleets from Hong Kong, South Korea, China, Singapore, Germany and Greece and is able to carry out repairs on a very wide range of vessels, including container ships, tankers, bulkcarriers and specialist vessels such as bunkering stations. The yard has three large docks and a large amount of pier space. Fujian Huadong shipyard often works together with major shipyards in both Shanghai and Guangzhou, for example in the building of a floating hotel for the offshore sector, built in Guangzhou, which was then moved and fitted out in Fujian Huadong.