Tug Sinks Off of New York 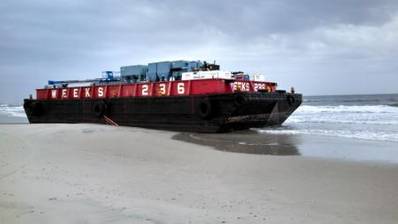 According to the U.S. Coast Guard, a 26-foot tugboat lost control of the barge it was towing off Atlantic Beach, N.Y., Monday evening. Coast Guard and state officials are responding to mitigate any hazards to the waterways and beaches nearby.

The Coast Guard was notified at 7:35 p.m. on Monday night that the towing vessel “PUSHY” had lost control of the 125-foot deck barge it was towing following an interaction with a large swell off of Atlantic Beach, N.Y. After the towing vessel and deck barge separated, the vessel sank and the barge was pushed up onto the beach at Silver Point County Park, where its owners, under Coast Guard supervision, are devising a plan to safely remove the barge. The exact cause of the separation and the subsequent sinking of the towing vessel are under investigation.

There was 1 mariner aboard PUSHY at the time of the incident that was safely removed by a New York Police helicopter. No injuries have been reported. The towing vessel and deck barge were on their way to the Weeks Marine Shipyard in New York City after leaving a job site on the Robert Moses Causeway Bridge where the barge was being used to sand blast and paint the bridge.

“The Coast Guard responds to all marine accidents in order to protect our nation’s waterways from hazards to navigation and pollution,” said Coast Guard Lt. Chris Barger, supervisor of the Coast Guard’s Marine Safety Detachment in Coram, N.Y. “After ensuring mariner safety and neutralizing any threats to the waterways, we analyze these mishaps to prevent similar events from occurring in the future,” he said.

Salvage efforts for the barge are expected to begin tomorrow. There is no evidence so far that the barge, which was carrying construction equipment, caused any negative impact to the marine environment.