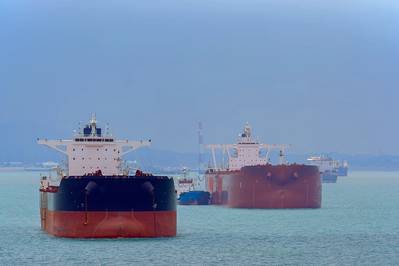 Sinopec Fuel Oil (Singapore) Pte Ltd aims to raise its monthly bunker sales volumes by more than 50% after it received a license from the Singapore government this month, the company’s general manager said on Monday.

Chinese refiners are expanding their foothold in the global marine fuels sector by increasing sales and output of 0.5% low sulphur fuel oil at key ports in Zhoushan, in China, and Singapore in recent years.

The Maritime and Port Authority of Singapore (MPA) awarded the bunker license to Sinopec's Singapore fuel oil unit on June 1, the MPA said on its website, allowing the company to use its own fleet to supply fuel directly to ships.

The company plans to increase its bunker sales by about 50,000 tonnes to about 100,000 to 150,000 tonnes per month, General Manager of Sinopec Fuel Oil (Singapore) Zhou Jie told Reuters.

"We will be expanding our focus on the bunkering business further and we are also planning to hire more employees in the bunker field going forward," said Zhou.

It aims to add one or two more barges this year for marine fuel oil delivery, while marine gasoil will be supplied by leasing barges from other suppliers, Zhou said.

The company does not intend to rent floating storage vessels in the near term and would rent onshore tanks instead, he said.

This is the first bunker supplier license MPA has awarded since April 2020.

The number of licensed bunker suppliers in Singapore has fallen over the past five years, down to 42 now compared with more than 50 in 2017.

(Reporting by Jeslyn Lerh; Editing by Florence Tan and)

US Grain Shipments Through Great Lakes-Seaway Up 39%