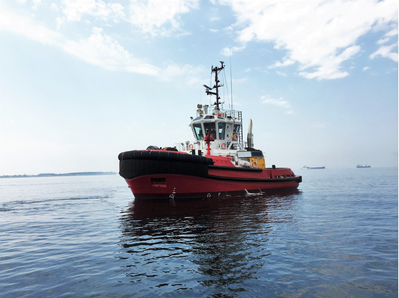 Sanmar Shipyards said it has reached a deal to sell one of its 2020-built tugboats to SMS Towage, the UK’s largest family-owned towage company.

The contract is for the purchase of Sirapinar XV, a vessel based on the RAmparts 2200 design from Canadian naval architects Robert Allan Ltd, which is currently operating as part of Sanmar’s fleet.

Designed for maximum efficiency in the performance of ship-handling duties for seagoing ships, the 54-tonnes bollard pull Sirapinar XV will be the third Sirapinar series tug in the SMS Towage fleet, joining its sisters Pullman, built in 2017 and Lloydsman, built in 2019. It will become the 11th Sanmar-built tug in the fleet.

The contract has a planned delivery date of October 2022 when the tug will be mobilized by a Sanmar crew.

Svitzer to Deploy Two More Tugs in the Suez Canal