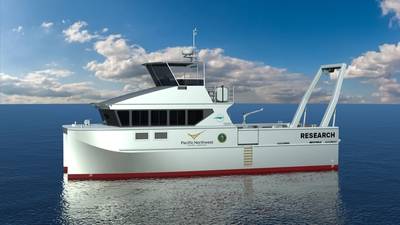 Incat Crowther said it has developed a bespoke design that offers exceptional capability for its size. The vessel’s 28m2 main deck is equipped with an A-Frame, boom crane and movable davit in addition to access to a foldable swim platform, extracting maximum functionality from the space. A set of stairs offer direct access from the main deck to the upper deck and flybridge, which affords excellent all-round visibility. The vessel can support the research of six scientists in a tailored layout containing multiple research workstations and convertible sleeping arrangements, providing PNNL a capable platform to efficiently carry out their research.