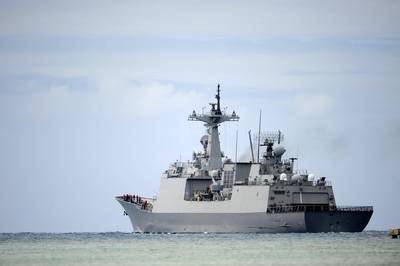 South Korea is sending a medical team to the Middle East to tackle a coronavirus outbreak on one of its ships on anti-piracy patrol while at home, new daily infections are hovering around record levels with 1,600 reported on Thursday.

South Korea was for months a coronavirus success story as it kept outbreaks under control with testing, tracing and social distancing but the Delta variant has been fueling a new wave of persistent infections in recent weeks.

The outbreak on the South Korean destroyer with some 300 service members on board operating in the Gulf of Aden is another headache for the administration of President Moon Jae-in.

Moon has ordered medical experts with emergency equipment to fly to the region to contain the outbreak and get patients out if they have to, said presidential spokeswoman Park Kyung-mee.

The Yonhap news agency, citing the Joint Chiefs of Staff, said six service members had tested positive for the coronavirus, while some 80 had developed some symptoms.

The defense ministry said none on board the destroyer had been vaccinated as the unit had left in February, before the vaccination campaign began for military personnel.

South Korea’s foreign ministry and it diplomatic mission were communicating with authorities of the host country to facilitate treatment and transport of any patients, ministry spokesman Choi Young-sam told a briefing.

Choi did not identify the country.

South Korea has recorded 173,511 coronavirus cases and 2,050 deaths since the pandemic began, data from the Korea Disease Control and Prevention Agency (KDCA) showed.

Only 30.8% of its 52 million people have received at least one dose of a vaccine, while 12% have been fully vaccinated.

Clusters of infections had been largely centered in the capital Seoul and neighboring areas but cases have spread to more rural areas, adding to worries about the Delta variant.

In response, the government tightened social distancing rules across most of the country on Wednesday, when authorities reported a daily record of 1,615 cases.

The KDCA has been reporting 1,000 or more new daily cases since July 7 and authorities expect the trend to continue until mid-August.

But there has been no significant increase in hospitalizations or deaths, with a mortality rate of 1.18% and the number of severe cases at 167 as of Wednesday, far below levels seen during the previous peak in December.