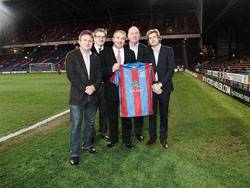 GAC and Crystal Palace Football Club (CPFC) have sealed one of the longest-running sponsorship deals in English Football, with the extension of their collaboration for another two years until June 2014. Dating back to 2004, the agreement now represents a decade-long uninterrupted relationship between the South London Club and the global shipping, logistics and marine services provider. Under the renewal agreement which was finalized in October, GAC continues as the club’s main sponsor and its logo will be featured prominently on CPFC’s first team and replica shirts, as well as on media backdrops, pitch perimeter advertising boards and club literature.

Crystal Palace’s Chief Executive, Phil Alexander, says: “This re-signing is a testimony to the quality of our relationship and mutual objectives. We are proud to have GAC as our main sponsor and we are working hard to repay the company’s loyalty by once again gaining Premiership status. “The national and international coverage we receive across all sectors of the media is a key element of our relationship, as are the business values we share. GAC is a great partner and we look forward to working for many more years to  come.”
GAC’s long-term association with Crystal Palace has given it a range of benefits, according to Bill Hill, GAC’s Executive Group Vice President. He said: “Our affiliation with the club has delivered a significant boost to our brand visibility, bringing the GAC logo to the attention of football fans, both at the stadium and watching on TV screens around the world. Further, it is a successful platform for B2B opportunities for the GAC Group’s global shipping and logistics businesses.”
“This latest renewal marks the continuation of a mutually beneficial partnership, in line with our philosophy of continuity and commitment to building long-lasting relationships.”