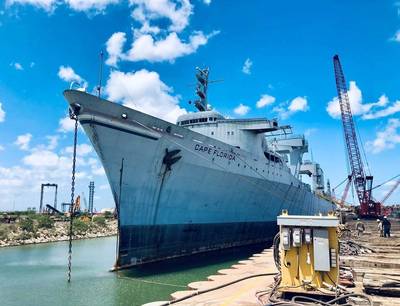 It's the end of the line for decommissioned barge carrier SS Cape Florida, which recently arrived at a scrapyard in the Port of Brownsville in Texas for recycling.

International Shipbreaking LLC, (ISL) part of EMR, has been awarded a U.S. Maritime Administration (MARAD) contract to transport, strip and recycle the decommissioned vessel, which has been out of service since 2006.

After being awarded the contract on July 6, ISL made preparations to tow the Cape Florida from MARAD Ready Reserve Fleet in Beaumont, Texas (BRRF) to its facility at the Port of Brownsville, Texas, where she arrived on August 13, 2020.

The project, set for completion in early 2021, will see 98% of all materials removed being recycled.

Built at Avondale Industries Corp. in New Orleans as SS LASH Turkiye in 1970, the vessel is a Maritime Administration (C8-S-81b) design Lighter Aboard Ship (LASH) Barge Carrier. LASH Barge Carriers transport light unpowered barges “Lighters” and are commonly called “Kangaroo Ships”. She is equipped with a large gantry crane system capable of lifting these barges out of the water for loading and placing them back in the water at the destination.

Reacquired by MARAD in 1986, the vessel was renamed SS Cape Florida (AK 5071) was deployed to many locations around the world, from the Suez Canal in Egypt to Dammam in Saudi Arabia, as well as to the United Kingdom and Germany. During her 34-year service she took part in many operations including Operation Desert Storm in 1990 as part of the Gulf War, to most recently, the Operation Iraqi Freedom from 2004 to 2005. She spent the past 16-years carrying out emergency sealifts.