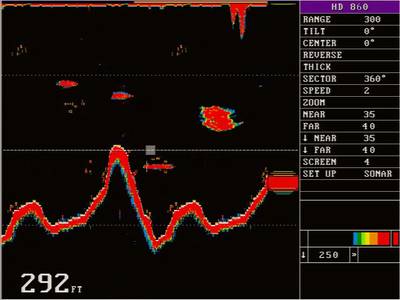 WESMAR, long the leading U.S. sonar manufacturer has never lost sight of the need for electronic soundbeam stabilization. Today, after four years of intensive design, drawing on the company’s five decades of sonar leadership, President Bruce H. Blakey announced the introduction of a new sonar, the HD860 series, with Precision Beam Stabilization. “The value of this advancement cannot be overstated,” said Blakey. “It is a giant step forward in the ability to find fish at greater distances, closer to the surface and closer to the bottom, and keep them on the sonar screen even in rough weather.”

WESMAR’s ‘Precision Beam Stabilization,’ places control right at the transducer. It uses an electronic gyro including a dedicated computer module with highly refined software mounted directly on the sonar transducer. The computer is constantly correcting for pitch and roll wherever the beam is scanning. Unlike other sonar that uses sensors mounted on the vessel to stabilize, WESMAR’s technology provides far more efficient ‘precision stabilization’ of the sonar beam.

WESMAR offers this system with a 6, 8 or 10-inch transducer.  Other significant features of WESMAR’s HD860:

Digital Link: Long interconnect cable runs are always subject to noise and low sonar performance. In the HD860 a digital link between the sonar electronics near the transducer and the computer console in the wheelhouse eliminates noise for maximum sonar performance and extreme picture clarity.

Searchlight Advantage:  No sonar has better directivity than WESMAR’s searchlight technology. One hundred percent of the transducer surface area points in the same direction giving a narrow and focused beam. Dispersed fish or hard to mark fish are detected clutter free. By comparison, Omni sonars have 65% of their transducer’s crystals pointing in the wrong direction, so dispersed fish go undetected!

Profile Scan: In depth sounder mode scan a swath and view the bottom below and on both sides of the vessel.  Sounders only mark under the vessel and not to the sides missing an enormous amount of bottom information. In the profile mode bottom coverage is 6 to 10 times greater than traditional sounders.

Heavy-duty Transducer Hoist: WESMAR’s heavy duty design is the result of almost five decades of sonar design experience. It moves up and down quickly… four seconds up or down out of harm’s way… should underwater conditions change quickly. Two down positions and automatic shut down for safety. The 10 inch model has a long-stroke hoist option an advantage only WESMAR provides.

Split Screen: Forward scan on top, port starboard bottom profile on lower half. Each screen has its own controls to maximize target detection.

Full Screen Sonar: Detect targets all around the vessel.

Split Screen/Dual Monitor: One monitor shows split screen with bottom history on the top half and profile on the lower half with depth displayed in the center of the screen. The second monitor shows the Trawlscan display.

Sounder: Full screen sounder with or without fish lupe will operate with the hoist up or down.