Stranded Grains Ships to Be Towed Free from Rosario 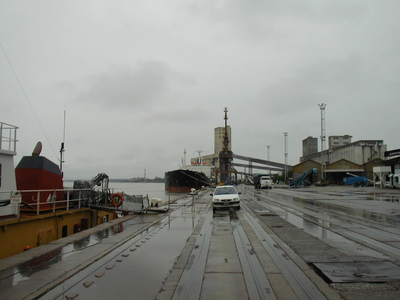 Seven grains ships stranded at Argentina's export hub of Rosario will be towed free and sent out to sea after they were loaded with more produce than could be carried on the port's increasingly shallow waters, local authorities said on Friday.

Rosario traffic has been snarled in the aftermath of a 48-hour strike by tugboat captains and other workers managing the flow of agricultural cargo ships.

Seven ships, six of them large Panamax vessels, loaded with soymeal, corn and other farm products were moored at Rosario during the work stoppage. After the strike they were unable to embark because they had been loaded with more cargo than could be carried on the port's increasingly shallow waters.

"There was a meeting between the transportation ministry, the Coast Guard and the river pilots, and they agreed to tow the ships out," Guillermo Wade, manager of Argentina's Chamber of Port and Maritime Activities (CAPyM), said in an interview.

"They will start leaving Saturday morning," he added. Once the ships are towed to the main channel of the Parana River they will be able to sail south past Buenos Aires to the Atlantic.

Paraguay and Brazil have agreed to release water from the Itaipu dam in order to facilitate barge traffic that had been stalled by the shallowness of the Parana.

But the labor issues are not over. The strike is set to resume for another 48 hours next week if union demands over access to COVID-19 vaccines are not met, labor leaders say.

The labor and navigation problems are hitting at high export season as Argentine growers bring in their 2020/21 soy and corn crops. The South American grains powerhouse is the world's No. 3 corn exporter and No. 1 supplier of soymeal feed used to fatten hogs and poultry from Europe to Southeast Asia.

The farm sector is of strategic importance to Latin America's No. 3 economy. Grains are Argentina's top source of export dollars at a time when central bank reserves are getting hit by a weak peso and a recession exacerbated by the pandemic.

Strike over vaccines
Argentina is tightening lockdown measures to combat a severe second wave of COVID-19, as daily cases and deaths have broken records over the last week.

Unions representing port workers, who they say should be classified as "essential" in order to qualify for COVID-19 vaccines, halted activity at Rosario on Wednesday and Thursday.

"The strike generated a total breakdown of logistics, causing congestion at anchorages and making it impossible for new ships to arrive at port to load," CAPyM and other port authorities wrote in a letter to the transportation ministry.

The Parana has been depleted by dry weather in Brazil, where the river starts. Its shallowness is shaving tonnage off allowable cargos, and meteorologists do not expect the navigability of the waterway to improve over the short term.