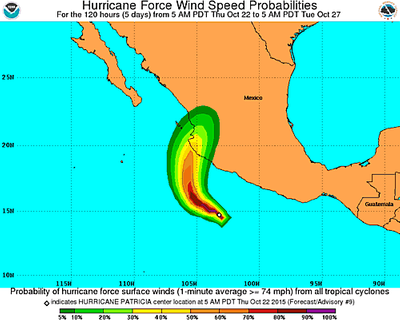 Hurricane Patricia was gaining strength off Mexico's Pacific coast on Thursday and was expected to land as "an extremely dangerous major" storm near a major shipping port and the tourist resort of Puerto Vallarta, the U.S. National Hurricane Center said.

The storm, which became a hurricane overnight, had maximum sustained winds of about 100 miles per hour (160 km per hour) as it moved toward the west-northwest at 17 mph (28 kph).

Patricia was currently located about 285 miles (460 km) south of the port of Manzanillo, where a hurricane warning had been issued. A tropical storm warning was in effect for Puerto Vallarta.

The storm was expected to hit the hurricane warning area by Friday afternoon or evening, the Miami-based hurricane center said.

None of Mexican state oil giant Pemex's major installations lie in the projected path of the storm.