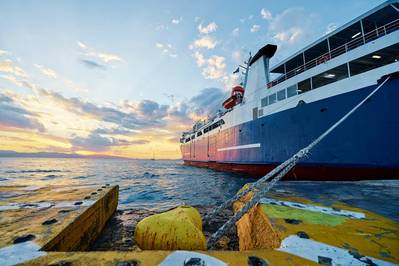 A study commissioned by trade association Interferry has revealed startling statistics on the far-reaching extent of the global ferry industry’s value to the world economy.

Research into the latest pre-Covid full-year figures found that, in 2019, ferries carried 4.27 billion passengers – on a par with aviation – and 373 million vehicles across a worldwide fleet of 15,400 vessels. Among other findings, the industry provided 1.1 million jobs, contributed $60 billion to the world GDP and represented approximately 20% of shipping’s economic value to the European Union.

The study was carried out by UK-based consultancy Oxford Economics, a world leader in economic impact assessment. It quantified three core channels through which the ferry industry drives economic activity and employment - direct support generated by the industry, indirect support generated within its supply chain, and induced support from ferry and supply-side personnel spending their pay on goods and services. Data was collected from a range of third-party sources and among Interferry’s membership of 260 operators and suppliers in 40 countries.

Interferry CEO Mike Corrigan said, "We already knew that the ferry segment punches well above its weight – it comprises only 3-5% of the total shipping industry – but the scale of the findings surprised even seasoned insiders.

"Now perhaps we’ll get the political consideration that all too often is more focused on airlines, rail operators and road transport. It’s long overdue for governments and the general public to appreciate the huge part that ferries play in passenger and freight transport – and this study confirms our sector’s vital importance in the process."

Corrigan announced the findings last week at Interferry’s 45th annual conference in Santander, Spain, hosted by Brittany Ferries. At the event - themed The Future is Ferries – more than 300 participants debated positive solutions and prospects in response to challenges such as Covid and climate change.

In a keynote address, research by London-based L.E.K Consulting into the post-pandemic outlook for Europe’s passenger ferry market was reviewed by Becrom Basu, a partner in the company’s transport and logistics practice. He noted that successful vaccination roll-outs had given governments the confidence to gradually ease stringent travel restrictions. This in turn was releasing pent-up demand that pointed to a significant uplift in European travel towards 2019 levels by next year.

Stressing that the ferry market looked best placed to capture this potential, he added, "Online searches for ferries have largely returned to pre-Covid levels, while searches for flights remain significantly lower. Ferries ranked highly as a safe form of travel. Sentiment towards them has improved while aviation has suffered.

"The pandemic has created a much more positive view of ferries and a large proportion of previous non-users are likely to consider this option for their next trip. Ferries have emerged as a clear winner in the battle of the modes."

Towards zero emissions - view from the top
CEOs from ferry companies in eight nations in Europe and the Americas took part in panel discussions that largely centered on plans to reduce greenhouse gas emissions over the next decade – with notable emphasis on the need for shoreside infrastructure to support operator initiatives.

Niclas Martensson, Stena Line, Sweden: "Zero is a must – it’s a survival tool - but there is no silver bullet. We are talking about different alternatives including hydrogen, methanol and batteries. We don’t yet see that the public is willing to pay for this but we can’t wait for their willingness. The industry must have the mindset to take the first step. We have to protect Mother Earth."

Patty Rubstello, Washington State Ferries, USA: "Our customers want it and they don’t have to pay for it because the government will come up with the dollars. In future we will be fully hybrid. I’m struck by the industry’s single-minded attitude towards reducing emissions. We’re not trying to avoid it, we’re looking for solutions."

Mark Collins, BC Ferries, Canada: "We see reducing emissions like safety – it’s expected. Electrification is the way to go for Canadian operators as we are blessed with a lot of clean hydro power. Meanwhile we see LNG as a sensible interim since British Columbia has the world’s cheapest supply – but all our LNG vessels are designed to be electric in the future."

Georges Bassoul, Balearia, Spain: "Six years ago we decided to go for gas and today eight of our vessels are operating on this, with more to come. We are very proud that emissions are down 40%. We’ve had to work with port authorities on bunkering and train our people. But we know gas is probably transitional so we are also studying other technologies."

Mauricio Orozco, Ultramar, Mexico: "Regarding let’s go green and reduce emissions…it strikes me that we might be causing emissions someplace else to get that fuel to your boats. I would love zero emissions vessels but we have only one port with charging facilities."

David Sopta, Jadrolinija, Croatia: "Ports must be equipped with the infrastructure to supply green fuel. If financing all falls on ferry companies it’s not fair because it’s not just our problem."

John Napton, Condor Ferries, UK: "We depend on ports and they have to be involved. The key message from this conference is that to reduce emissions our port partners need to come on board."

Morgan Mooney, FRS/San Juan Clipper, USA: "The fact that the global ferry industry is able to meet again after the pandemic and share our vision reinforces what Interferry constantly reminds us about…that we are stronger together."

Regarding the ultimate drive towards electrification, CEO Mike Corrigan has now signaled Interferry’s intention to get governments, ports and energy companies onside in order to provide adequate power infrastructure so that ferries can plug in.

He said, "Going forward, we will use the findings from our study on the ferry industry’s size and economic impact to push decision makers towards funding port-side power development. A unified approach is critical in supporting operators’ own commitment to achieving the emissions reduction targets set by the IMO, European Union and other regulators on the path to zero."