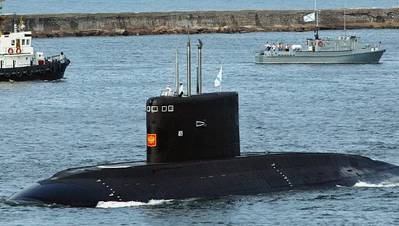 Stary Oskol will be the third in a series of six Varshavyanka class submarines which are expected to join the fleet by 2016. The first sub, the Novorossiisk, was laid down in August 2010, followed by Rostov-on-Don in November 2011.

These submarines are mainly intended for anti-shipping and anti-submarine missions in relatively shallow waters.

The vessels, crewed by 52 submariners, have an underwater speed of 20 knots with the ability to patrol for 45 days. They are armed with 18 torpedoes and eight surface-to-air missiles.