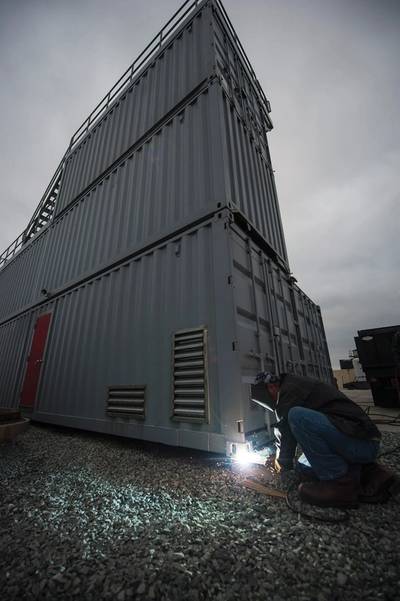 Smoke bellows out the ventilation ducts. The glow of the blazing fire emanates down the passageway. Firefighters move with precision and purpose, pausing to unleash a torrent of water towards the fire as they kneel before it. Such was the scene at the Navy’s first submarine firefighting trainer, located at Naval Air Station North Island (NASNI) Oct. 29.

Commander, Navy Installation Command (CNIC) approached Kidde Fire Trainers almost one year ago in response to the incident on the USS Miami, in which a fire caused over $400 million of damage to the submarine.
Numerous issues arose from the incident, primarily firefighter response and the readiness of base firefighters to deal with fighting shipboard fire. The need for additional training resources was identified in order to train base fire departments on what they’ll encounter when fighting fires in the tight quarters of a submarine.
Kidde Fire Trainers is scheduled to build three other modular trainers at Naval bases around the country in addition to the NASNI trainer, and has also currently stationed mobile training units at Naval Bases in Kings Bay, Ga. and New London, Conn. The new firefighting trainer at NASNI is the first of the four permanent modular trainers to be built.
The other three trainers purchased by CNIC will be located at Portsmouth, N.H.; Norfolk, Va. and Bangor, Wash. These trainers, located in four different regions, will allow federal firefighters, emergency services and outside agencies access to a proper trainer to increase operational capabilities in the event that a live incident or fire occurs on a ship, said David Salerno, Assistant Fire Chief with Southwest Region Fire and Emergency Services.
“The major problems we have in ships or submarines is figuring out where the fire is internally, figuring out where you are, and being able to deal with the horizontal and vertical passages that aren’t typical,” said Salerno, who is also the NASNI training center manager and San Diego metro area training officer.
The accuracy of the submarine’s representation in the new trainer will provide firefighters the best possible training available. “The way this has been designed with the specifics in it that replicate the interior of a submarine, with submarine hatches, they can drill and train on those specifics and get their skill level up so if they do have to respond in the dockyard they’ll be ready for it,” said Cumming.
In addition to the hatches, the trainer has scuttles, grates, a galley, a main space, electrical panels, cable trays and simulated wires throughout bulkheads, said Mike Tenney, a captain with Federal Fire Department San Diego stationed at Naval Base Point Loma Fire Station 111.
“This gives our firefighters an opportunity to figure out ahead of time, before they’re actually in a real fire, how to navigate their way through a ship,” said Salerno. “It provides a large measure of realism that will be taken with each of those firefighters when they go to the real fire.”
Tenney, a former damage controlman in the Navy, understands the difficulty of navigating through a ship or submarine without previous shipboard experience.
“A lot of the guys haven’t been on ships, they haven’t been in the Navy, so this is going to teach them the tactics needed in assisting the ship’s crew with shipboard firefighting,” Tenney said. “This is going to give great awareness to people that don’t have much experience.”
When fighting a fire in the dockyard, typically, the ship’s force begins the process. They determine where the fire is, set their boundaries, and start the fire attack. However, if they realize they need more resources to deal with the incident, the base fire departments are called in and respond to the situation, said Salerno.
“Now that we have this trainer, we have something that’s specific to our needs, something we can internally develop training objectives to and then train to those objectives on a schedule that works for us on a regular basis,” said Salerno. “It will make us infinitely more effective when we’re actually fighting a fire on a ship.”
Training in the new facility has already begun, with scenarios designed to push the capabilities of the trainees. Two classes of firefighters completed a two-day course on Oct. 29 and Oct. 31, respectively, to become instructors on the new trainer, familiarizing themselves with the various operations and safety features of the facility.
While the firefighters continue to train and acclimate themselves to the unique challenges of shipboard firefighting, the Navy will reap the benefit of having its base and local fire departments better equipped to handle ship and submarine fires thanks to its new firefighting trainers.

DP World Antwerp Gateway has ordered a fleet of 34 Automated Stacking Cranes for its container terminal in Antwerp, Belgium.

As shipowners mull the pros and cons associated with new fuels to meet tightening emissions rules, Chevron Marine is finding…

In the next decade, we’ll see more accelerated change in shipping fuels than we’ve seen in the last century. What does this…