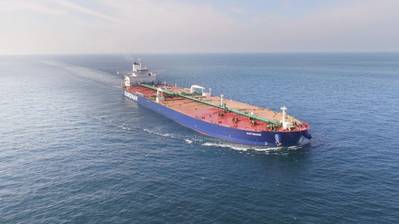 A Greek-registered supertanker recently came to the rescue of a group of Syrian refugees stranded without water, food and fuel in the Mediterranean Sea.

Late in the evening on May 27, 2022, Samaris Konstantinos from Brittania forwarded an email that the club’s emergency line received from the NGO ‘Watch the Med’ in regard to a rescue request nearby the Euronav very large crude carrier (VLCC) Antigone. Eight Syrian refugees, including seven men and one female, were sailing a small craft and were without water, food, and fuel for their engine.

The email from the NGO was originally received by Rescue Coordination Centre (RCC) Malta, RCC Rome and the authorities in Malta and Italy. It was then circulated to Euronav’s Operations Manager and the Designated Person Ashore (DPA) and it was agreed to get in touch with the Antigone.

The DPA called the vessel and a Search and Rescue (SAR)-operation was initiated based on SOLAS Ch.V regulations 33, which stipulates, among other things, that when a vessel is in a position to be able to provide assistance to a vessel or person in distress at sea, it is bound to proceed with all speed to their assistance, informing them or the search and rescue service that the ship is doing so. This obligation applies regardless of the nationality or status of such persons or the circumstances in which they are found.

In less than one hour after initiating the rescue, the small craft was spotted by Antigone and the distressed refugees were successfully saved.

Eventually, the Spanish authorities confirmed that the rescued persons could disembark in Algeciras, although the rescue operation did not fall under their maritime jurisdiction. On June 3, the refugees could finally disembark.

Top U.S. LNG exporter Cheniere Energy Inc said it will repair and replace equipment at its Louisiana terminal after tests…