Svitzer Adds Another Tug in the Humber 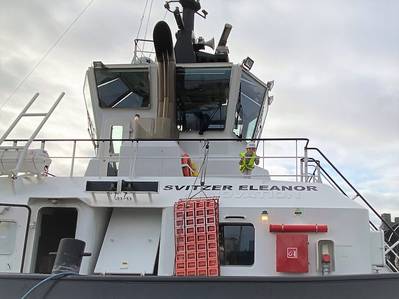 Towage operator Svitzer said it has purchased and renamed the Immingham-based tug Innovation, following the end of a chartering agreement for the vessel from Damen Marine Services.

After the acquisition, the three-year-old vessel was renamed to Svitzer Eleanor. The name was picked by and named after Eleanor Wright, the daughter of Training Master Sam Wright, who has worked on board the tug since Svitzer first chartered the vessel from Damen.

Svitzer describes the 75.3-ton bollard pull Damen RSD Tug 2513 as a solid, compact tug with high maneuverability. With a length of almost 25m and a beam of over 13m, Svitzer Eleanor’s propulsion system includes two MTU 16V 4000 M63L main engines which can power the vessels to speeds of up to 13kt.

The vessel, which is completely insulated and accommodates four people, carries a sound absorbing ceiling in the wheelhouse and includes floating floors. The superstructure is mounted to reduce noise levels, with the aim to improve working conditions on board and increase crew welfare and comfort.

Ita Dickson, Cluster Managing Director UK North, Svitzer Europe, said, “Svitzer Eleanor will play a crucial role in further enhancing our operational capability in Northern England and will help us to solidify our position as the leading towage services provider in the Humber for the long term. The acquisition of this tug is proof of our commitment to the region.

“We are also extremely excited about the involvement that our crew, and specifically Eleanor Wright, have had on the naming process of Svitzer Eleanor. We always aim to be a valuable, positive part of the communities where we operate, and seeing the interest that the new tug has sparked among the crew’s children and families is very special to us.”