Svitzer to Deploy Pair of Ice-class Tugs in Scandinavia 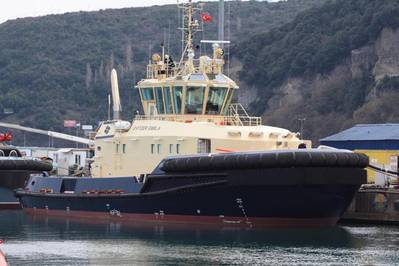 Svitzer Europe took delivery of the first of two new icebreaking tugs from Med Marine to support its operations in Scandinavia.

The 30-meter, 60-ton bollard pull ASD Tundra 3000 ICE tugs were designed by Robert Allan to tackle a range of conditions specific to the requirements in Scandinavia, where temperatures drop in the winter and create demands for ice breaking to keep ports open to seaborne trade. For instance, the design of the tugs will allow them to pass the locks of Sweden’s Trollhätte Canal to access Lake Vänern and the Gota River to provide ice breaking services.

Both vessels are built to Finnish-Swedish 1A ice class standards, and are able to break ice up to 1 meters thick. This affords Svitzer with operational flexibility, bolstering the icebreaking ability of the organization’s Scandinavian fleet.

The names of both Svitzer Embla and Svitzer Edda have been drawn from Norse mythology. According to the mythology, Embla is the name of the first woman created by the gods, and Edda is an Old Norse work of literature written in Iceland during the early 13th Century. These mythological references honor the region where the vessels will operate and resonate with many of Svitzer’s existing named vessels in Scandinavia.