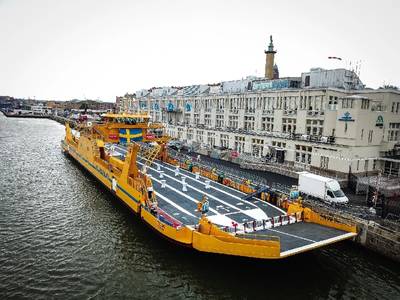 The ferry will service Sweden's busiest maritime routes, along with more than 100,000 vehicles transported per month, the majority being heavy trucks.

The 100-metre Tellus ferry can carry 80 cars and 297 passengers per tour and will operate with a battery capacity of 949 kWh mainly in fully electric mode.

Danfoss Editron supplied the electric drive system. The Tellus ferry will “mainly operate on fully-electric mode”, which will help contribute to the government target of becoming free of fossil fuels by 2045, and operate on one of Sweden’s busiest maritime routes, transporting over 100,000 vehicles per month, said a press note.

"Tellus is the latest addition to Swedens Transport fleet and we are proud to be the builders of this fully electrical ferry. Together with Saturn and Neptune, she is the largest among the road ferries in Sweden," said a press note from the Estonia-based Baltic Workboats AS.

The completed ferry was delivered to operator the Swedish Transport Administration yesterday (Monday July 22), and forms part of the country's aim to achieve net zero greenhouse gas emissions by 2045, according to the government agency's environmental coordinator Peter Peterberg.

Tellus has in total of 12 battery-racks and in each rack there are 14 air-cooled battery modules and a control system with a total of 959 kWh capacity.