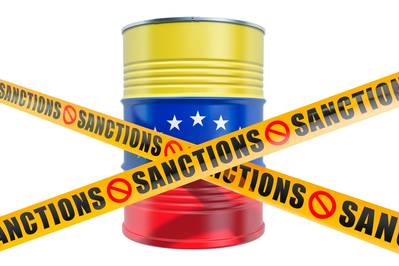 Mercantile & Maritime said on Monday it would terminate its shipments of Venezuelan oil for Rosneft after the United States imposed sanctions on the Russian oil firm's Swiss trading unit.

Last month when the sanctions were announced, the company issued a statement calling the actions  against Rosneft’s subsidiary RTSA and its Chairman "illegal, unjustified, and an act of legal abuse."

Over the past year, Rosneft has emerged as the key recipient of Venezuelan oil as it said it was using the crude to recover billions of dollars of debt that Rosneft Trading provided to the Venezuelan government.

Rosneft said the operations were not in breach of any sanctions and also accused Washington of double standards because it allows U.S. oil major Chevron to continue the same trade.

With its fleet of nine tankers, Singapore-based Mercantile & Maritime was one of the largest shippers for Rosneft Trading over the past year, when the Russian company lifted tens of millions of barrels of oil from the South American country.

Rosneft was selling crude mainly to the main remaining buyers of Venezuelan oil in India and China.

"Following an extensive review of our live arrangements, we can confirm that any activities impacted by the recent U.S. sanctions will be terminated in accordance with the specified timeline," Mercantile said in a statement.

"As a global business operating across the oil and gas value chain, the Mercantile & Maritime Group operates in full compliance with all international trade laws and maritime regulations," it added.