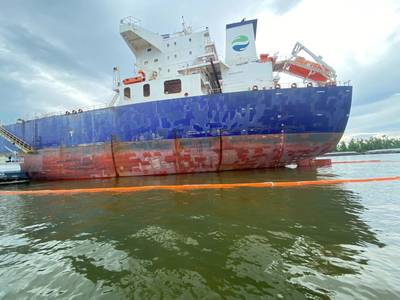 Hafnia Rhine discharged an estimate of 2,100 gallons of oil before its crew secured the source of the discharge. (Photo: U.S. Coast Guard Sector New Orleans)

A Singaporean-flagged oil tanker discharged oil on the Lower Mississippi River near Kenner, La., on Thursday.

The tanker crew secured the oil discharge, but Sector New Orleans pollution investigators estimated up to 2,100 gallons of fuel oil entered the water and contaminated approximately 50-60 barges in the vicinity.

The National Response Corporation and Environmental Safety and Health Consulting Services were hired as oil spill removal organizations. The OSROs have placed 2,700 feet of containment boom and 3,320 feet of sorbent boom around the affected area including the contaminated vessels and have utilized the use of sorbents to recover oil product.

The Coast Guard said it will oversee the timely cleanup of oil to mitigate environmental impacts through its coordination with partner agencies and the continued assessment of shorelines and waterways.

There have been no reports of impact to wildlife.

The cause of the discharge remains under investigation.