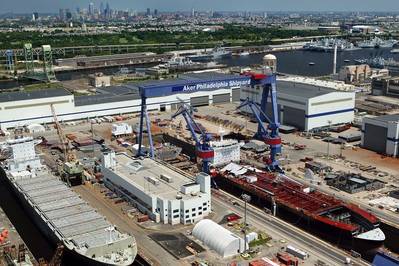 U.S. shipbuilders are making a $500 million bet on robust domestic demand for crude oil from newly-tapped shale fields by building new tankers without having lined up customers to lease them.

Philly Tankers AS, majority-owned by Aker Philadelphia Shipyard is building four ships on spec, and Seabulk Tankers Inc, an indirect wholly-owned subsidiary of SEACOR Holdings Inc, is building another two. The 330,000-barrel ships, which cost about $125 million each, conform to the 1920 Jones Act, which requires ships moving between U.S. ports to be U.S.-built, -crewed and -flagged, making them about three times more costly to build and operate than a comparable foreign-flagged ship.

The builders are betting that they'll recoup their investment by finding customers such as ExxonMobil or Marathon who will sign long-term contracts for rates between $70,000 and $80,000 a day to lease them for travel between U.S. ports. It’s a bet that looks likely to pay off, except for one consideration: that the flood of crude coming out of the U.S. will prompt lawmakers to relax rules prohibiting oil exports, cutting demand for Jones Act-conforming ships.

The crude oil export ban is "the wild card," said Brian Ladin, an investor with interests in Jones Act ships. "I think maybe the reason you haven't seen some of these open ships taken is because everyone's saying, 'Hey, what if the export ban gets lifted?'"

Those concerns grew last week after the U.S. Department of Commerce's Bureau of Industry and Security told Pioneer Natural Resources Co that putting light oil, known as condensate, through a stabilizer was sufficient processing to qualify it as a refined product, eligible for export without a license.

That could take as much as 200,000 bpd out of the U.S. market, based on Reuters' analysis of existing stabilizer capacity. Loosening the decades-old ban on selling U.S. crude abroad could reduce the need for shippers to use Jones Act-compliant vessels to move cargoes.

SEACOR spokeswoman Molly Hottinger confirmed that Seabulk Tankers has three tankers on order, one of which is already contracted.

Most shipbuilders line up long-term charter contracts, typically for three to five years and often with an option to extend, before they place an order, in a "back-to-back" transaction.

A spokeswoman from Philly Tankers, which is building two and intends to exercise an option to build two more, declined to comment.

One vessel, the American Phoenix, was relet by Koch Shipping and Supply to Exxon for $120,000 a day in May, breaking a previous $100,000 record, although that figure is said to have included a foreign shipping component, shipping sources said.

Such steep rates, combined with crude production that the U.S. Energy Information Administration forecasts won't peak until 2020, have led to orders for 17 tankers, as well as at least eight coastal barges capable of carrying about 150,000 barrels or more.

Wild Card
U.S. crude oil production hit 8.2 million barrels per day (bpd) in March, and is projected to rise to 9.3 million bpd in 2015, according to the U.S. Energy Information Administration, when the first of the newly-built ships is set to be delivered.

Between 25 percent and 35 percent of the coastal Jones Act fleet, or about 44 ships, carries crude oil between loading hubs like Corpus Christi, Texas, and refineries along the Gulf and East Coasts, or along the West Coast, a steep rise from just one ship in early 2013. The remainder shuttles refined products to Florida.

Much of the additional production coming out of Corpus Christi will be generated in the Eagle Ford shale fields in South Texas. That crude is known as extremely light and sweet, and is ill-suited for use by Gulf Coast refineries. Refineries in Europe and other regions are better able to handle such crude.

To be sure, a lifting of the crude oil export ban could also stimulate increased production - up to 11.2 million bpd by 2022, according to a recent assessment by IHS, a Cambridge, Massachusetts-based consultancy.

"The people that have contracted for those ships firmly believe there's going to be business for them in the future," said a shipping executive who asked not to be named.

There's also the question of whether some tonnage will be scrapped at year's end, potentially boosting demand for new ships. Two coastal barges with combined capacity of 560,000 barrels will celebrate their 40th birthdays in January of 2015, making them too old for some traders such as Valero and BP, which have strict rules about the age and seaworthiness of their vessels.

The owner of the barges, OSG, would need to secure further two-year contracts to recoup the costs of upgrades that would extend their useful life by another four to five years.

Some shipping industry sources attributed the unclaimed tonnage to the overheated spot market. The recent jump in spot rates may have prompted charterers -- oil majors and traders like Shell, Conoco and Trafigura -- to bide their time and wait until the market cools off, while the owners hold out for more lucrative deals.

For now, both charterers and shipbuilders are in a "wait and see" pattern, said one shipbroker.