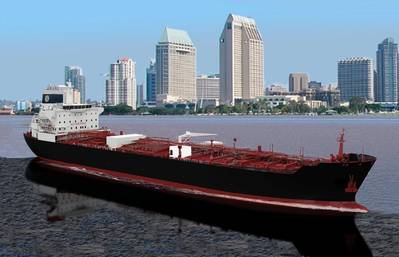 General Dynamics NASSCO, a wholly owned subsidiary of General Dynamics, has entered into a contract with Seabulk Tankers, Inc., a wholly owned subsidiary of SEACOR Holdings Inc. for the design and construction of a 50,000 deadweight ton LNG-conversion-ready product carrier with a 330,000 barrel cargo capacity, plus an option for one additional vessel.

Construction is due to begin in 2015, with delivery scheduled for the fourth quarter of 2016. This new tanker will be constructed at the NASSCO shipyard in San Diego, meeting the Jones Act requirement that ships carrying cargo between U.S. ports be built in U.S. shipyards.

NASSCO explains that this new 610-foot-long tanker is a continuation of the ECO MR tanker design, which delivers improved fuel efficiency and incorporates the latest environmental protection features, including a Ballast Water Treatment System.

Including this order, NASSCO is now under contract for the design and construction of seven tankers, plus an option for one additional vessel. In September, NASSCO entered into a contract with Seabulk for two tankers of the same design, which was preceded by a contract in May for four vessels from American Petroleum Tankers.

These seven ships are being designed by DSEC, a subsidiary of Daewoo Shipbuilding & Marine Engineering (DSME) of Busan, South Korea. DSEC’s ECO design achieves improved fuel efficiency through several features, including a G-series MAN ME slow-speed main engine and an optimized hull form. The tankers will have conversion-capable, dual-fuel-capable auxiliary engines and the ability to accommodate the future installation of an LNG fuel-gas system and Type C LNG tanks.

Kevin Graney, vice president and general manager of General Dynamics NASSCO, said, “NASSCO remains committed to bringing the most economical and environmentally sound technology to Jones Act owners and operators. We are very pleased to extend our partnership with SEACOR through a third and potentially a fourth ECO tanker. This follow-on order is a clear indication that NASSCO is the shipyard of choice for Jones Act tankers.”