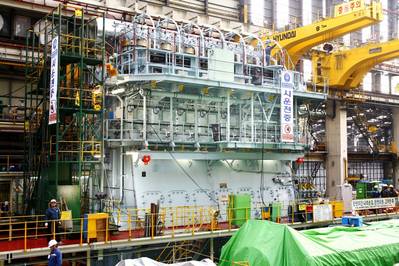 Wärtsilä to supply main engines for a series of 9 large vessels being built by Daewoo for Kuwait Oil Tanker Co. (KOTC)

The VLCCs will be fitted with 7-cylinder Wärtsilä RT-flex 82T engines and a Waste Heat Recovery System, which utilizes exhaust gas energy  to generate steam which is used to operate a turbo generator that produces ship's electricity supply.

All engines will be built by the Engine & Machinery Division of Hyundai Heavy Industries Co., Ltd. (HHI-EMD), which is a Wärtsilä licensee since 1975 and is based in South-Korea. The orders were received during the first half of the year.

“The choice of Wärtsilä RT-flex engines ensures that these new vessels will be both fuel and energy efficient, and that their emissions will be minimized. It is obvious that the Wärtsilä RT-flex82 engine is increasingly becoming the preferred choice for VLCCs worldwide,” says Lars Anderson, Vice President Merchant, Wärtsilä Ship Power.