Incat Tasmania’s Latest Ship on the way to Japan 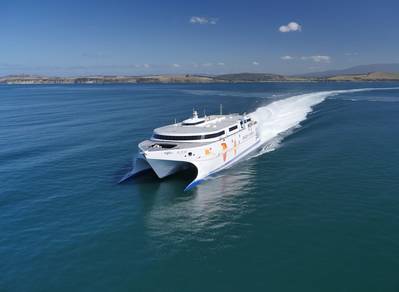 Built at the Incat shipyard at Prince of Wales Bay, Hobart the vessel was sea trialled late   March, and has departed Hobart on her delivery voyage.  The vessel will go into service in April with Sado Kisen, a long standing ferry operator in Japan.

Akane will operate from the Niigata and Naoetsu ports on the west coast of Japan to the Sado Island ports of Ogi and Ryotsu.  Sado Island is the sixth largest island of Japan in area, its rich history and relaxed rural atmosphere make Sado one of the major tourist destinations in the Niigata Prefecture.

The 85 metre vessel has capacity of 692 persons (passengers and crew) on a single passenger level and the vehicle deck can carry a combination of trucks and cars or, in car only mode, with the nine hoistable mezzanine decks used it will carry 151 cars.

Vehicle Deck: The nine hydraulically operated mezzanine decks provide Sado Kisen with the flexibility to cater for a full tourist load of passenger cars at peak times and to carry trucks, vans and cargo loads as required. The vehicle deck has 13 tonne axle load (single axle dual wheel) in the truck areas of 4.6 metres clear height and 2 tonne axle load on the remainder of the vehicle deck and 0.8 tonne (single axle single wheel) on the mezzanine decks.  Cars and trucks access the vessel using two folding ramps over the stern.


Passenger Access:  Car drivers and their passengers can enter the passenger space via an elevator, or two forward internal staircases, one a more traditional staircase the other a sweeping spiral staircase winding from the vehicle deck to Tier 2.  There are also all-weather stairs located aft on both port and starboard leading to the aft viewing area behind the main passenger cabin, a great spot for viewing the scenery or getting a breath of fresh air.

Walk-on passengers will enter at the Mezzanine level using dedicated passenger doors either port or starboard depending on which port the vessels berths at.

As with all Incat vessels, the immediate impression when entering any section of the passenger cabin, is one of a light airy, open plan area where all passengers have outside views.

Speed:  The ship achieved over 37 knots loaded with 470 tonnes deadweight during sea trials, in fact to facilitate an early departure the trials were conducted with enough fuel to travel from Hobart to Japan.   No lightship trial was conducted however the vessel will operate at approximately 40 knots with 200 tonnes DWT, and faster should it ever be in the position to travel light!

Sea trials were conducted under the supervision of DNV (Det Norske Veritas), with inspectors and surveyors from two Japanese organisations, JG and SRC also on board.

Livery: Akane’s striking livery features a stylised image of the Toki bird, the Japanese crested Ibis, flying along the hull, their white bodies, red and orange wings and red faces will certainly attract attention.  The Toki is an endangered species but following a captive breeding program is being reintroduced to Sado Island and is an attraction for visitors to the area.

Bridge:   The highest level of the vessel is the bridge area with its forward facing control positions for the captain, navigator and engineer. The wheelhouse has 360 degree visibility over the aerodynamic structure, an aft-facing docking console and CCTV monitors are fitted to assist with docking.  From the bridge all the ships systems can be monitored and controlled. State of the art navigation, communication and electronic systems including Furuno radar systems are fitted, with all equipment in compliance with the HSC Code.

Ride Control:  A Naiad active ride control system is fitted to maximise passenger comfort.  The system combines Incat manufactured active trim tabs aft with a retractable T-foil located at the aft end of the centre bow.  The T-foil system comprises a foundation structure built into the centre bow, a hinged deployable steel T-foil and hydraulic actuation system allowing the T-foil to be stowed for normal operation but deployed in heavier seas.  The system  combined with the Incat hull and centre bow design ensures MSI (Motion Sickness Incidence) is reduced in higher sea states by reducing pitch, roll and heave, the major contributors to passenger discomfort.

Safety and Evacuation
Four Marine Evacuation Stations (MES), from Tasmanian company LifeRaft Systems Australia, each capable of serving up to 200 persons under normal evacuation, are located on Tier 2 passenger deck (2 port and 2 starboard).  Two SOLAS semi-rigid inflatable dinghies with 25hp motor is located outboard adjacent to the superstructure. Lifejackets, fitted with lights and whistle devices, are provided in accordance with international regulations for passengers and crew, including children.  As always, safety is paramount and is a driving factor throughout design and construction.

Fire Protection and Detection
Hobart based company, CBG systems supply the lightweight structural fire protection system aboard Akane, including fire doors and dampers.  To protect all moderate and high risk spaces the ‘Rapid Access Composite’ system is used across the vehicle deck, with CBG ‘Lightweight’ panels used for engine room and below deck bulkheads and deckheads.  The fire protection system meets all the demands for lighter weight and faster installation/removal for this type of craft.  The vessel is fitted throughout with a range of fire detection and safety systems, CCTV cameras, zoned fire sprinkler systems and hydrants protect engine rooms, vehicle decks and passenger areas.