US Navy is Buying the Wrong Ship, Costing Taxpayers Billions 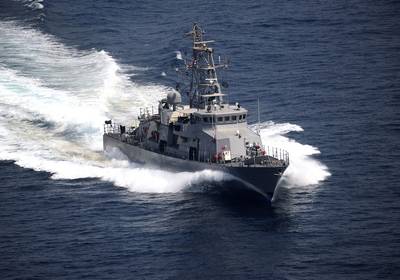 The United States will spend $585 billion on its armed forces in 2015 — the biggest military budget in the world by far. That’s just the Defense Department budget and doesn’t include the tens of billions of dollars that Washington spends on veterans, the purview of the Veterans Administration, or nuclear-weapons development, which falls under the Department of Energy.

There’s tremendous pressure in Congress to spend less. Though the Pentagon argues vehemently that budget cuts will harm national security, there are some fairly obvious places where defense cuts would not only save taxpayers’ money, they could also actually boost national security.
Case in point: the Navy’s patrol force for the Persian Gulf. The sailing branch’s plan is to revitalize the force with new vessels that will cost far more than the current ships. Worse, the new vessels will probably be far less effective. The Navy could do better by spending less — more than $3 billion less, to be precise. That would surely please Congress as well as skeptical voters.
For more than a decade, a small force of 10 patrol boats has plied the shallow waters of the northern Persian Gulf, guarding Iraq’s strategic oil terminals and keeping an eye on Iranian military moves. The 10 Cyclone-class boats, based in the tiny Gulf state of Bahrain, are some of America’s busiest warships and would likely be the first to see action if the standoff over Iran’s nuclear program ever turned violent.
Consider: When Iranian forces seized a U.S.-flagged container ship in the Persian Gulf on April 28, for reasons that remain unclear, an American destroyer rushed to the scene, along with three Cyclone-class patrol boats.
These 179-foot-long boats, armed with guns and missiles, are now viewed as among the Navy’s most important ships. Remarkably, they’re also some of the least expensive — setting U.S. taxpayers back just $20 million apiece when the Navy originally bought them in the early 1990s. Most Navy ships — admittedly far larger — cost hundreds of millions, even billions, of dollars.
The Cyclones, which each have two 25-millimeter cannons, machine guns, grenade launchers, batteries of short-range anti-ship missiles and shoulder-fired antiaircraft rockets, are cheap because they’re so simple. They don’t have high-tech sensors, complex weapons or experimental equipment and design features. They’re straightforward metal hulls packing lots of simple guns and missiles that rely heavily on their hardworking 28-person crews to function, rather than on fancy automated systems like on many larger vessels.
In a way, the Cyclones are a happy accident. The Navy commissioned 14 of the boats, starting in 1993, in the hope of using them to transport SEAL commandos ashore on secret missions. But the Cyclones proved to be too big for the infiltration role. In 2000, the sailing branch began disposing of the boats, donating one to the Philippines and lending several others to the Coast Guard.
Then after the 2003 invasion of Iraq, the Navy found itself with the new mission of protecting Iraq’s oil infrastructure — and also preventing Iran from exerting potentially damaging influence on the shattered country. The Navy’s Arleigh Burke-class destroyers — its standard warships — penetrate 31 feet into the water, deep enough to risk frequent grounding in the shallow waters of the northern Persian Gulf.
By contrast, the Cyclones draw just seven feet of water, so they can freely maneuver throughout the watery frontier separating Iraq and Iran. The Navy abruptly halted its efforts to dispose of the patrol boats, asked the Coast Guard to return the borrowed copies and sent 10 of the tiny warships to Bahrain, where they were placed within quick sailing distance of the volatile ocean hotspot.
The Cyclones proved so adept at patrolling the northern Gulf that the Navy soon doubled down on them. Their hulls and equipment were refurbished and extra weapons were added to them. The upgrades, which began in 2009, should extend the vessels’ useful lives into the mid-2020s, at which point they could begin to suffer serious corrosion and other wear and tear.
The Navy will need to replace these Cyclones. It should replace them with ships equally adept at sailing in shallow water. The mission calls for a small patrol boat that needs to be inexpensive. Currently, however, the Navy plans to swap out Cyclones for much larger and costlier Littoral Combat Ships, with hulls that draw twice as deeply as the patrol boats. Meaning they can’t patrol in all the areas the Cyclones can.
The new Littoral Combat Ships — the Navy is buying as many as 52 in coming years — are products of a late-1990s military craze for high-tech, multi-mission “platforms.” That is, ships, planes and ground vehicles that can switch from one task to another with the press of a button.
The problem with that concept is that the more you ask of a particular piece of hardware, the more complex — and expensive — it tends to be.
Worse, gear that can do lots of things at once usually can’t do any particular thing especially well.
That multi-mission mindset has produced costly weapons boondoggles, including the F-35 stealth fighter (at $400 billion, history’s most expensive weapons program) and the Army’s Future Combat System ground vehicles, which the Pentagon cancelled in 2009 after spending $20 billion on development.
Each multi-mission Littoral Combat Ship was supposed to cost a little over $200 million, but the actual price today is more than twice that. The ship is meant to be equally adept at hunting for sea mines and fighting submarines and surface ships, but it’s too lightly armed for any one of those tasks. It is also more than twice as long as a Cyclone and 10 times heavier, yet comes equipped with only slightly more weaponry.
It just so happens that Bollinger Shipyards, the same Louisiana shipyard that built the Cyclones, is building Sentinel-class boats for the Coast Guard that are roughly the same size as the Navy vessels, far more modern and reasonably priced at just $70 million a boat.
If the Navy bought 10 fewer Littoral ships and acquired 10 new patrol boats for $70 million apiece instead, it would represent a net savings of more than $3 billion in ship construction costs while also boosting national security.
Sounds like a pretty good deal.