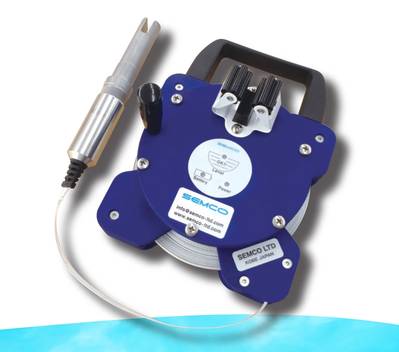 With the IMO 2020 sulfur cap in effect from the beginning of this year, the need to measure lighter marine fuels has grown, and Japan-based SEMCO has a tool for the job.

In complying with the new regulations, there will be an increasing number of cases in which high transparency and low viscosity compatible fuels such as MGO are supplemented, and in these instances, there has been concern with conventional scales due to past experiences in which it was difficult to get an accurate sounding measurement of tank contents, SEMCO said. While HFO is seen more easily on conventional measuring tapes, lighter fuel options are often more difficult to measure.

The portable device has a sensor at the end of a measurement tape that is lowered into a tank and triggers a lamp and alarm once the liquid surface is reached. A measurement is made from the liquid's surface upward.

SEMCO said the product has been on the market since 2014, developed with NYK Line, one of Japan's largest shipping companies, who was having difficulty accurately measuring bunker due to cappuccino effect.  NYK has since adopted the technology on board 130 vessels, and SEMCO has supplied its solution to more than 480 vessels globally, including vessels in Japanese Coast Guard fleet.

The manufacturer noted that Honesty can measure other liquids such as ballast water and bilge.