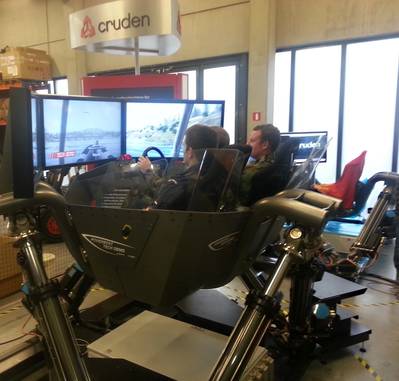 Severe vibrations and shocks of up to 9G over an average of 1000 hours per year. That’s what instructors of fast small ships such as the Fast Raiding, Interception and Special Forces Crafts (FRISC) currently have to endure. But that will soon become a thing of the past. In two years’ time operators of these types of craft will be trained using a Fast Small Ship Simulator (FSSS).

That’s just one of the many advantages that will accrue when the FSSS prototype becomes available as a result of the project started today. Other benefits include: increased levels of training, resulting in accident prevention in practice; elimination of the dependence on weather conditions to conduct education and training; no wear and tear of operational FRISCs now used for training and a sharp reduction in fuel costs. In addition it opens up the possibility of training with other simulators, including marine simulators such as the Ship Handling Simulator (SHS).

Objective
The Fast Small Ship Simulator project aims to develop a simulator geared specifically to the operator as actor in a dynamic nautical setting in which broaching, slamming, surfing, planing and capsizing as well as the interaction with other vessels or objects (quay, beach, pier, jetty etc) function as the key elements of risk during the operation of small fast manoeuvrable craft.

Joint venture
This project is a joint venture between DMO, the military equipment arm of the Dutch Ministry of Defence, Dutch research institute MARIN and suppliers Cruden and Tree C Technology. The naval defence school DVS and the Surface Assault and Training Group (SATG) of the Royal Navy are participating in this project as key end-users.

The agreement was signed for the Ministry of Defence by Major General Peter Dohmen in his capacity as chairman of CODEMO, the committee overseeing the development of defence equipment. The general revealed that private enterprise, particularly small and medium-sized businesses, are encouraged to submit development proposals to the Defence Materiel Development Committee. Should they be judged to be relevant initiatives with the prospect of generating returns for Defence, then CODEMO will give the go-ahead. The FSSS project is one such initiative.

Consortium
The FSSS project is unique in its high degree of technological innovation as it is the first in the world to link advanced manoeuvre- and seagoing simulation technology, modern motion alignment and state-of-the-art visualisation of conditions in an integral way.