MGT Power Station to be Built at Teesport 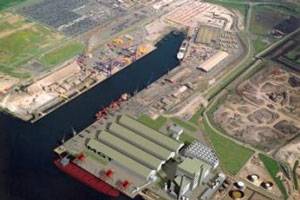 Cut    Artist's-impression-MGT_web
PD Ports, the owner of Teesport, welcomes the Government’s decision to approve MGT Power’s 295 megawatt (MW) wood fuelled power station which is to be built on the South Dock area of the port. One of the largest biomass plants set to be built in the UK, the Tees Renewable Energy Plant will produce enough carbon neutral, sustainable electricity to power 600,000 homes across the North East.

MGT Power’s $819.8m investment is bringing a new impetus to the area in terms of the size of its renewable energy power station. MGT Power has a grid connection agreement; it has secured long term supply contracts for biomass feedstock from managed sustainable forests and plantations, and suppliers ready to take on plant construction. The port has the plans ready for a new quay wall and crane capacity at Teesdock. The plant will require 2 -3 years for construction and will be operational by autumn 2012.

“With MGT Power’s plan becoming a reality, we will see a new traffic flow of over 2m tonnes per annum through the port. This is great news,” stated PD Ports’ Group Chief Executive David Robinson.

MGT Power had received planning approval from Redcar & Cleveland Borough Council in November 2008 and has now received the final approval from the Department of Energy & Climate Change (DECC) to proceed (known as the Section 36 approval).

“We have moved a long way forward over the past year and are grateful for the help of all our local partners to realise our plans. The local MPs Vera Baird and Ashok Kumar, PD Ports and Redcar & Cleveland Council have all been enormously helpful to us,” commented Chris Moore, Director at MGT Power. “We can now secure all the detailed financing plans, let the construction contracts, and start building. We remain very optimistic that we can be ready in three years time.”