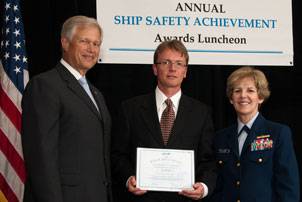 The Chamber of Shipping of America (CSA) presented the Foss vessels with Jones F. Devlin Awards at the Annual Safety Awards Luncheon held this year in New Orleans, Louisiana.  The awards are given to self-propelled merchant vessels that have operated for two full years or more without a crew member losing a full turn at watch because of an occupational injury.

Altogether, the Foss ships achieved the equivalent of 144 years without a lost-time injury.