By Jacob Gronholt-Pedersen and Stine Jacobsen May 24, 2019 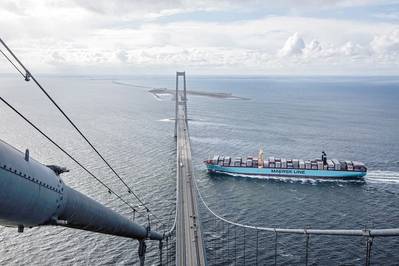 Maersk, which is seen as an indicator of global trade patterns, cut its forecast for global growth in container traffic this year due to the trade dispute between the United States and China.

"The recent escalation of the trade war induced by an increase in tariff rates and threats of implementing additional tariffs could take global container trade growth to the lower end of the 1-3% interval (range)," CEO Chief Executive Soren Skou said, referring to a forecast range it had given three months ago.

During his three years as CEO, Skou has sold off the Danish group's oil and gas business to focus on the container business, a strategy some analysts say has left Maersk exposed during economic downturns.

The strategy was initially welcomed by investors, but Maersk's share price has fallen 42% since a peak in July 2017 and is now virtually trading where it was when Skou took on the job in June 2016.

On Friday the group reported first-quarter results in line with expectations as a decline in container volumes was balanced by higher freight rates.

The trade war depressed trade volumes between Asia and North America in the first three months of the year, it said.

New tariffs could reduce the expected growth in global container volumes by up to 1 percentage point, Skou told a press conference in Copenhagen after returning from a trip to China.

"We hosted 50 Chinese customers for dinner in Shanghai yesterday and I can assure you that they all wanted the trade war to end soon," Skou said.

"They live off exporting goods, so there is also a pressure on the political system in China to find a solution," he added.

He further cautioned that even if a solution between the world's two top economies was found, the trade wars will not end. "Then the U.S. will just turn its gaze towards Europe," Skou said, referring to U.S. President Donald Trump's threat to impose tariffs on cars from the European Union and other producers from around the world.

Cost concerns
Maersk reported earnings before interest, tax, depreciation and amortization (EBITDA) of $1.24 billion for the first quarter, compared with $1.25 billion forecast by analysts in a Reuters poll.

"When sailing around the world, Maersk is bound by the market price. But costs are actually something they can control themselves and this is what management is measured on," he added.

Maersk also announced a $1.5 billion share buy-back, after pledging to pay out a significant portion of the proceeds from the sale of its oil and gas business to Total in a $7.45 billion deal. It will also distribute 30 to 50 percent of its underlying result to shareholders starting this year.

This would imply roughly 60% of the free cash from the oil sale, which according to Fearnley Securities is largely matching the management's promise.