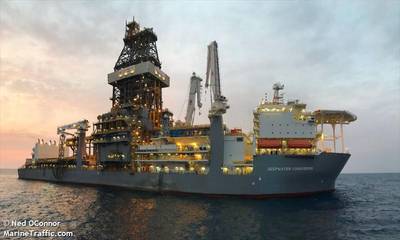 Transocean said that its Deepwater Conqueror drillship had won a one-well contract with "a major operator" in the U.S. Gulf of Mexico.

"The value of this contract adds approximately 85 days and $28.5 million in the backlog," Transocean said, without sharing the identity of the client. Deepwater Conqueror is a DSME 12000 ultra-deepwater drillship, built/upgraded in 2016/2017 by DSME in South Korea.

The Deepwater Conqueror is currently in the Gulf of Mexico, under a $579,000 a day charter with Chevron. This contract expires in December. No date was given for the start-up of the contract with the unnamed "major operator."

Additionally, Transocean said Wednesday that the Deepwater Asgard drillship had secured a one-well contract with "another operator" in the U.S. Gulf of Mexico. It didn't say who the client was nor when the contract is expected to start.

"The value of this contract adds approximately 90 days and $27 million in backlog and includes $40,000 per day for managed pressure drilling services. Both contracts are expected to start in the first quarter of 2022," Transocean said.

The Deepwater Asgard is a DSME-built ultra-deepwater drillship delivered in 2014. The rig is currently on a contract with Beacon in the U.S. Gulf of Mexico at a dayrate of $280,000. This contract ends in August, when another Beacon contract is set to start, which will keep the rig busy until October, at a dayrate of $240,000.

The announcement of new contracts come just days after the Swiss-based driller released its 2Q fleet status report, in which it announced several new contracts and one contract cancellation. Read more here.

Transocean's total backlog - excluding the deals announced Wednesday - was around $7.3 billion as of July 21, 2021.