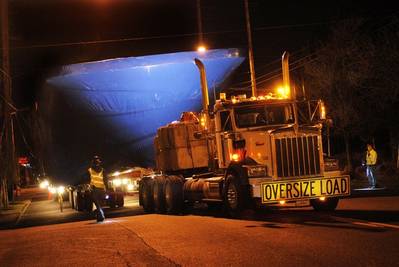 In early July, residents of communities on both sides of Lake Roosevelt in eastern Washington will celebrate the launch of a new ferry, the Sanpoil, replacing the Martha S. which has made 30 to 35 crossings every day for 65 years, linking the communities in Lincoln and Ferry Counties.

Playing a role in the ferry project was its delivery to eastern Washington by Omega Morgan, a Northwest provider of complex lifting, rigging and transport solutions. The new ferry was built by Foss Maritime Co. in its Rainier, Ore., facility and consisted of nine pieces—the main hull and eight additional loads. It will be assembledover the next few months at the Crescent Bay Boat Launch on Lake Roosevelt.

“The main hull was essentially a beam and dolly move with a semi-tractor performing a drawbar pull of the ferry,” explained Mark Richardson, project manager. “Eight dollies were mounted to the framework to create a trailer, and then the tractor loaded with counter-weights pulled the load down the road.”

Richardson said the long trip through parts of Oregon and into eastern Washington entailed many challenges that required the crews to exit their trucks to control steering of the dollies by remote control.

On May 24, Stena RoRo delivered Stena Estelle, the first of two ordered extended E-Flexer ferries to Stena Line. The vessel… 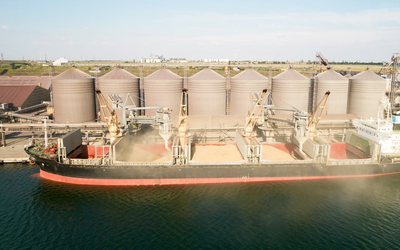