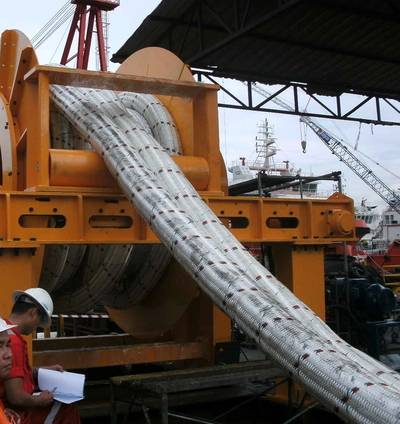 Richard Hepworth, President at Trelleborg Marine Systems, said, “We’re committed to meeting the demands of both shallow and deep water tandem mooring operations. As such, we strive to provide operators with best-in-class solutions that enable vessels to be moored safely and efficiently, even in the harshest offshore environments across the globe.


With over 30 years’ of experience designing, manufacturing and commissioning high performance equipment to the first FPSO projects across North West Australia, coupled with dedicated support throughout the full project timeline, Trelleborg was specified to deliver the requirements of the projects’ FPSO tandem mooring operations.

The tandem mooring-winch and integrated Quick Release Hawser Hook (QRHH) are installed onto the stern of the FPSO and used to moor a shuttle tanker in open sea conditions, with a separation of up to 150 meters. The mooring system includes integrated mooring tension monitoring, as well as a remote release system that can instigate an emergency release of the FPSO / shuttle tanker mooring from the FPSO stern deck or vessel’s control room.

Trelleborg’s hawser retrieval winches are designed for installation onboard FPSO vessels and are primarily used for tandem mooring. The winch stores the mooring hawser only while the chafe chains are stored externally. In this way, the FPSO chafe chain can remain attached to the hook at all times under normal operation. This arrangement significantly reduces the time necessary to moor the shuttle tanker as well as   minimizing the risk of injury to mooring crew, since the FPSO chafe chain is not man handled during deployment and retrieval operations.

The QRHH on board the FPSO is the anchorage for the FPSO mooring chafe chain. The QRHH incorporates an operator-instigated remote release system allowing the FPSO shuttle tanker mooring to be disconnected under Emergency conditions that could impose excessively high mooring tension.

Continuous monitoring of mooring tension is handled by Trelleborg’s Integrated Monitoring System, which is generally installed within the vessel’s control room. The system displays mooring loads, notifies of high load conditions and records the mooring load history in chart and numerical forms.

The trending of the real time mooring tension can provide the vessel operator with a valuable early warning indication of impending mooring problems, which can occur due to the dynamic conditions imposed on both FPSO and shuttle tanker in an open sea.

The capacity of the QRHH is generally 250 tonnes Safe Working Load (SWL), and 30 tonnes for the hawser winch. Having the QRHH independent from the hawser winch means that during ship yard conversion, underdeck-stiffening requirements can be minimized, leading to significant cost benefit in vessel modifications.

Trelleborg’s development and implementation of GPS (Offshore Mooring and Docking System) which has been developed for Floating Storage Regasification Unit (FSRU) side-by-side and jetty berthing can also be utilized for Tandem Mooring whereby the proximity of the tandem moored shuttle tanker to the FPSO can be monitored continuously. The system can be included as an integrated package within the mooring system instrumentation.

With all tandem-mooring projects, there is mandatory Class certification required for mooring equipment that encompasses material quality, inspection and testing. Trelleborg has worked closely with all of the major Classifiers since 1982.