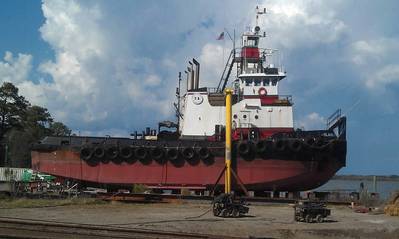 Stevens Towing of Charleston, South Carolina has sold their U.S flag, twin screw tug “Island Fox” (ex Pt. Brower, Arctic Knight, Arctic Fox) to private foreign buyers. Marcon International, Inc. adds that they acted as broker for the sellers, to whom Marcon sold the vessel in 2006 from the West Coast.

The 85’ x 30’ x 11’ depth tug was built in 1981 at Dakota Creek Shipyard in Anacortes, Washington as the “Arctic Fox” for Bering Marine of Seattle. It was originally designed and built as a versatile boat for working both in the rough, cold coastal waters and the shallow rivers of Alaska. “Island Fox” is ice strengthened and shallow draft, having a tunneled stern with propellers in fixed kort nozzles set up into the stern to allow for an operational draft of abt. 6.0’ light for river work

Towing gear consists of a single drum Markey TYS-24 winch with 25,000lbs of line pull and capacity for 1,350’ of 1 ¾” wire, plus hydraulic tow pins and stern roller. “Island Fox” is also fitted with two electric barge winches mounted just aft of the house, with fairleads leading forward, and a push knee on the bow for making up to the stern of barges while in the pushing mode. Crew accommodations are provided in three single and two double berth staterooms.

The 32 year-old tug was in good condition, having just come off contract. She also has a valid ABS load line good through August 2016. “Island Fox” is being delivered on her own bottom by the Buyer to her new home in the Caribbean. Buyers requested their name be kept confidential for commercial reasons.