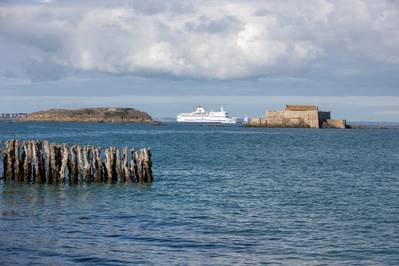 Passenger ferry leaving the port of Saint Malo in the morning in the direction of United Kingdom Credit: wjarek /AdobeStock

France and UK signed a new maritime security treaty to protect passengers on ferries in the Channel from terrorist attacks.

"This new treaty strengthens UK security by fully equipping law enforcement and emergency responders to respond to terrorist incidents, no matter where they occur," the UK government said.

The UK Foreign and Defence Secretaries are in Paris today for discussions on security issues with their French counterparts.

With the signing of the treaty, the UK government said its emergency responders will have more power to deal with terrorist incidents in the Channel.

"The UK-France Maritime Security Treaty, negotiated between the UK Home Office and French Secrétariat général de la Défense et de la Sécurité nationale, is the foundation for seamless joint and coordinated action to be taken by UK and French forces in response to an incident, such as a terrorist attack onboard a ferry or other large vessel in the Channel," the UK government said.

The Treaty includes provisions which will enable the UK and France to: share security information concerning potential security threats, mount swifter and stronger initial responses to serious security incidents, coordinate more efficient joint responses, and cooperate more effectively in the aftermath of an attack or incident.

"The treaty enables joint intervention by UK and French security forces to work side by side to keep people safe," the UK government added.

The treaty will take effect following formal ratification by both countries. It is designed to mitigate against a high threat security incident on a ferry or other large vessel in the Channel, but it is not intended to tackle illegal migration, for which other initiatives and agreements are either in place, or in development.