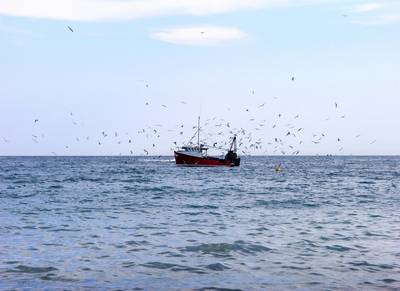 Britain is sending two navy patrol boats to the British Channel Island of Jersey after France suggested it could cut power supplies to the island if its fishermen are not granted full access to U.K. fishing waters under post-Brexit trading terms.

Prime Minister Boris Johnson pledged his "unwavering support" for the island after he spoke with Jersey officials about the prospect of the French blockade.

Johnson "stressed the urgent need for a de-escalation in tensions," a spokesperson for Johnson said. "As a precautionary measure the U.K. will be sending two Offshore Patrol Vessels to monitor the situation."

Earlier, France's Seas Minister Annick Girardin said she was "disgusted" to learn that Jersey had issued 41 licenses with unilaterally imposed conditions, including the time French fishing vessels could spend in its waters.

"In the (Brexit) deal there are retaliatory measures. Well, we're ready to use them," Girardin told France's National Assembly on Tuesday.

"Regarding Jersey, I remind you of the delivery of electricity along underwater cables ... Even if it would be regrettable if we had to do it, we'll do it if we have to."

With a population of 108,000, Jersey imports 95% of its electricity from France, with diesel generators and gas turbines providing backup, according to energy news agency S&P Global Platts.

Jersey's government said France and the European Union had expressed their unhappiness with the conditions placed on the issuance of fishing licenses.

Jersey’s external relations minister, Ian Gorst, said the island had issued permits in accordance with the post-Brexit trade terms, and that they stipulated any new license must reflect how much time a vessel had spent in Jersey's waters before Brexit.

"We are entering a new era and it takes time for all to adjust. Jersey has consistently shown its commitment to finding a smooth transition to the new regime," Horst said in a statement.

The French threat is the latest flare-up over fishing rights between the two countries.