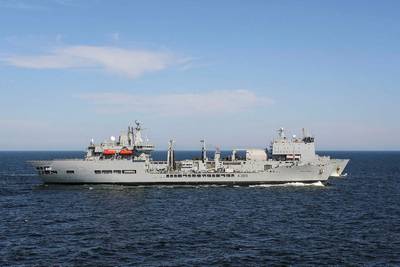 The U.K. has sent one of its Royal Navy ships to support relief efforts in Haiti as the Caribbean country recovers from the recent devastating earthquake.

The Wave-class fast fleet tanker RFA Wave Knight, deployed to the Caribbean as part of the Royal Navy’s Royal Fleet Auxiliary (RFA), arrived off the west coast of Haiti in the early hours of Wednesday and will serve as a landing pad for U.S. military helicopters responding to the 7.2-magnitude quake that struck the impoverished country earlier this month, killing and injuring thousands. The U.K. vessel will allow U.S. helicopters to refuel as they fly to and from the island, extending their range and time available to support the disaster relief efforts.

RFA Wave Knight and another British naval ship, HMS Medway, have been deployed to the Caribbean since May 2021 to to provide humanitarian assistance and disaster relief in the region throughout hurricane season.

"Communities in the Caribbean can rely on the Royal Navy to come to their aid when disaster strikes, said U.K. Defense Secretary Ben Wallace. "The Royal Navy has a proud history of supporting British Overseas Territories and other partners in the Caribbean during hurricane season. I’m proud that the U.K. can now play a part in the U.S. effort to respond to the devastating earthquake in Haiti."

The UK Government on Thursday announced a package of up to £1 million of initial support to Haiti, in addition to other U.K. contributions to the UN Central Emergency Response Fund, the Red Cross Disaster Relief Emergency Fund and the Start Fund, which have allocated funding of £5.8 million, £600,000 and £250,000 respectively.

Following a request for international assistance from the Haitian government, the U.K. will also send a team of medical experts this week, and a U.K. humanitarian expert is deploying from the UN to provide support.