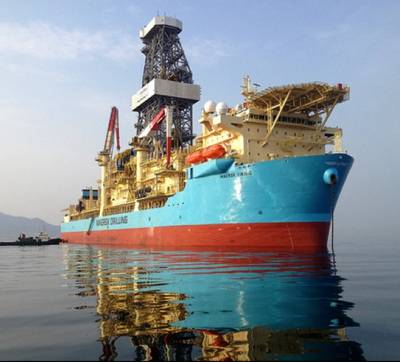 Maersk Drilling informs it has taken delivery of its first ultra deepwater drillship, 'Maersk Viking', from the Samsung Heavy Industries (SHI) shipyard in Geoje-Si, South Korea. The new vessel has started its voyage to the US Gulf of Mexico where it will commence a three year contract with ExxonMobil.

The owners explain that Maersk Viking is the first in a series of four ultra deepwater drillships to enter Maersk Drilling’s fleet. The four drillships represent a total investment of USD 2.6bn and will be delivered from the SHI shipyard in 2014.

Featuring dual derrick and large subsea work and storage areas, the drillship design allows for efficient well construction and field development activities through offline activities. With their advanced positioning control system, the ships automatically maintain a fixed position in severe weather conditions with waves of up to 11 metres and wind speeds of up to 26 metres per second.

Special attention has been given to safety on board the drillships. Equipped with Multi Machine Control on the drill floor, the high degree of automation ensures safe operation and consistent performance. Higher transit speeds and increased capacity will reduce the overall logistics costs for oil companies.

About the company
Maersk Drilling provides high-efficiency drilling services to oil companies around the world. In addition to the three drillships and four jack-up rigs in order, the modern fleet counts 17 drilling rigs including deepwater semi-submersibles and high-end jack-up rigs.