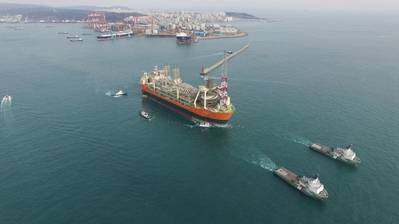 Mechanical engineering specialist EnerMech said it is in the process of delivering a £5-million-plus contract to support the turret delivery team on BP’s Glen Lyon FPSO, which has arrived for hook-up operations West of Shetland.

The Glen Lyon is a key element of the multibillion pound Quad204 project, which includes redeveloping the Schiehallion and Loyal fields, extending production out to 2035 and possibly beyond.
EnerMech provided winch engineering, associated operations and materials for the FPSO’s main turret system riser winch handling system while the Glen Lyon was under construction and will provide ongoing field support during hook-up operations through to 2017.
Aberdeen-headquartered EnerMech has previously supported BP in 2014 on the preparation and operation of the FPSO Schiehallion’s riser winch system during the field suspension and vessel removal phase.
EnerMech technical support manager, Neil McNaughton, said, “We embedded an Engineering Technical team within BP’s project team and assigned a 20-man team of supervisors and technicians who were specially trained for infield operations, maintenance and support of turret services.”