John C. Stennis Underway for Sea Trials Ahead of Schedule 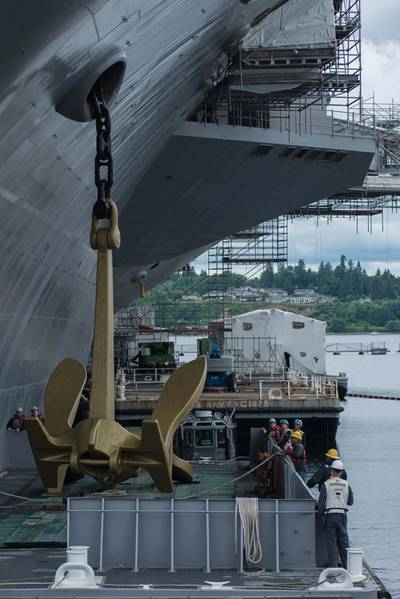 John C. Stennis entered PIA in February with the largest work package ever planned for a six-month availability for a Nimitz-class carrier, requiring more than 2,800,000 man-hours of work between ship's Sailors, Puget Sound Naval Shipyard and Intermediate Maintenance Facility, and contractors. Through teamwork, dedication and expert management, the ship was able to get underway ahead of their originally planned departure date.
"With the extraordinary support of the Puget Sound Naval Shipyard and Intermediate Maintenance Facility, USS John C. Stennis has not only returned to sea to complete the most ambitious six-month carrier availability ever attempted, but has done so three days ahead of schedule," said Capt. Gregory Huffman, John C. Stennis' commanding officer. "I am tremendously proud of the hard work and dedication required to reach this milestone, and look forward to seeing the ship and crew in action as we begin our at-sea training cycle."
The goal of PIA is to overhaul and rejuvenate the ship, improving operational systems as well as the quality of life aboard the ship. The work package included items ranging from upgrades to the ship's navigation systems and refurbishing crew berthing spaces.
With so many projects to be completed and only six months to complete them in, staying on schedule was no easy feat.
"Overall, the work package was 140 percent above the normal amount for a CVN-class carrier availability," said Cmdr. Ken Holland, John C. Stennis' chief engineer and PIA coordinator, from Littleton, Colorado, "But with shipyard and ship's force coming together, we were able to overcome obstacles as a team and work together every day to complete the task we needed to, becoming more efficient and ultimately resulting in us arriving at this point ahead of schedule."
One of the challenges faced was balancing the different work being performed by Sailors, shipyard personnel and contractors being conducted at the same time.
"If we weren't on the same page, then we wasted time and time simply isn't something we have a lot of," said Ensign Joshua Hays, John C. Stennis' auxiliary technician, from Jacksonville, Florida.
The key to John C. Stennis' success was teamwork, coordination and communication between everyone involved.
"The biggest thing was communications, the ability to work together as a team and helping each other out whenever we needed help," said Lt. Cmdr. Mike Palmer, John C. Stennis' maintenance manager, from Seabeck, Washington.
John C. Stennis Sailors are now embarking on the final step of PIA: taking the ship out to sea to demonstrate its new, repaired and refurbished systems working as designed.
"The [crew] is motivated to get the ship back out to sea," said Palmer. "We are very eager to complete this successful PIA and get us out there to where we belong."
John C. Stennis is underway conducting sea trials as part of a planned incremental availability at Puget Sound Naval Shipyard and Intermediate Maintenance Facility, during which the ship underwent scheduled maintenance and upgrades.