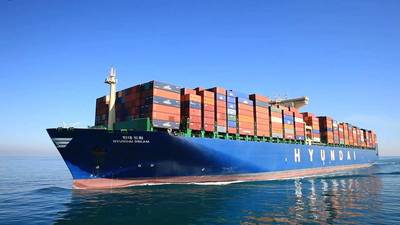 South Korean Container carrier Hyundai Merchant Marine (HMM), which collaborates with the 2M alliance, has had its rating improved from the default rating D to instead BB, informs the carrier.

"Korea Investor Service (a Moody’s Affiliate)  has upgraded Hyundai Merchant Marine’s credit rating from D (Default) to BB (Stable)." says the company statement.
HMM has successfully overcome all the challenges through debt for equity swap and changing conditions (adjustment of charter fee / debt adjustment with bondholders etc).
Favorable conditions for HMM including reduced HMM’s financial burden, benefits from Korean government supports, a possibility of support from its largest shareholder, and merits as Korea’s main national flag carrier led to raise HMM’s credit rating from D to BB.
Expected to have a high likelihood of upgrading its credit rating based on continuous improvement on earnings.
Meanwhile, HMM’s debt ratio slightly increased from 186% (2016.09) to 235%, as HMM issued convertible bonds, and acquired overseas shipping terminals etc.