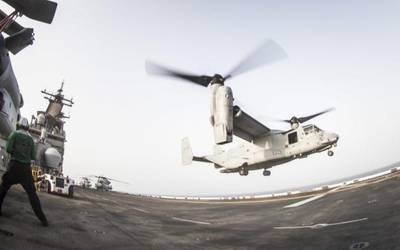 The patrol is "standard" but the situation - growing tension between the United States and Iran - is not.

Soon after the roar of the Harrier fades, two combat helicopters and two unmistakable Osprey aircraft with their tiltable rotors land back on the flight deck.

"We want to make sure that we assure allies in the region and to ensure freedom of navigation and free flow of commerce," says Colonel Fridrik Fridrikson, commanding officer of the 11th Marine Expeditionary Unit.

Attacks on tankers near the Strait of Hormuz, which the United States blames on Iran, have unsettled crucial shipping lanes that link Middle Eastern oil producers to markets in Asia, Europe, North America and beyond.

Iran denies involvement, but has threatened to respond robustly to U.S. sanctions that have followed President Donald Trump's abandonment of a major 2015 treaty, in which Iran agreed to restrict nuclear work in return for the lifting of sanctions.

The United States has beefed up its military presence and is asking allies to help protect the strategic waters off Iran and Yemen. The U.S. Fifth Fleet, based in Bahrain, says Gulf Arab states have stepped up patrols.

Captain Jason Burns, commander of the Boxer, flagship of the Amphibious Ready Group, said it had left San Diego in May on a Middle East mission planned a year ago, related to "our usual partnerships with our allies in the region".

The group includes the USS John P. Murtha, the USS Harpers Ferry and the 11th Marine Expeditionary Unit, which has around 4,500 sailors and Marines.

On the Boxer, officers stand on a viewing gallery known as Vulture's Row, using binoculars to follow a traditional Arab dhow sailing by and report its movements.

In the hangar bay below, Marines test machine guns. Three hovercraft, each loaded with three Light Armoured Vehicles, stand ready to launch, with trucks, Humvees and other gear lined up behind.

Burns insists the deployment is nothing unusual: "We do our standard presence operations and provide stability to the region, as the Navy has done since World War Two."