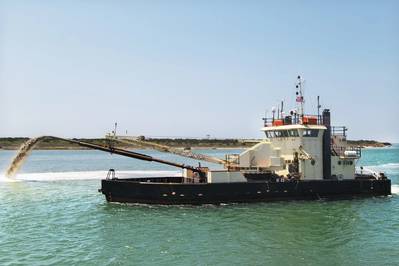 The U.S. Army on Wednesday announced  the Civil Works studies, projects and programs that the Corps would implement in Fiscal Year 2022 with the $22.81 billion in supplemental funding provided in two recently enacted laws — the Infrastructure Investment and Jobs Act; and the 2022 Disaster Relief Supplemental Appropriations Act.

The spend plan supports the Administration hitting the ground running by focusing on current Fiscal Year 2022 spending. Future announcements will provide spend plans for subsequent years. Each spend plan will be in continued support of Administration goals of expanded access to America’s ports through dredging, as well as building resilience in the face of global climate change, while benefitting economically disadvantaged communities and regions, and advancing environmental justice.

"The Army will work with community partners to leverage these historic Civil Works funds for investments that strengthen national supply chains through our commercial navigation mission, help communities impacted by climate change to increase their resiliency, advance environmental justice, and invest in communities that have too often been left behind," said The Honorable Michael L. Connor, Assistant Secretary of the Army for Civil Works.

Bipartisan Infrastructure Deal: Infrastructure Investment and Jobs Act, Public Law 117-58
With the $17.099 billion provided in Public Law 117-58, the Army will fund Army Civil Works studies and projects, maintain existing infrastructure, and repair damage and dredge channels in response to floods and coastal storms. Through this investment in water resources infrastructure, over $5 billion will help improve community resilience in the face of global climate change and $3.936 billion will address commercial navigation improvements at coastal ports and on the inland waterways. The Army plan funds the South Florida Ecosystem Restoration program at $1.098 billion, a historic funding level that will enable significant progress in restoring Florida’s nationally significant Everglades ecosystem.  In the coming year, the Army will engage with environmental justice communities in the development of a strategy to allocate $130 million in two pilot programs authorized in the Water Resources Development Act of 2020 that target economically disadvantaged community’s needs.

As part of this effort, the Army plan funds to completion 15 feasibility studies, the Preconstruction Engineering and Design (PED) phase of 5 projects, and 19 construction projects in Fiscal Year (FY) 2022.  Additionally, in FY 2022, 22 new projects will be funded in the Construction account.

Disaster Relief Supplemental Appropriations Act, 2022, which is Division B of Extending Government Funding and Delivering Emergency Assistance Act, 2022, Public Law 117-43
Of the $5.711 billion supplemental funds that Public Law 117-43 provides for the Army Civil Works Program, $100 million is designated for studies of proposed projects in the four states where major disasters were declared in FY 2021 due to Hurricane Ida – Louisiana, New Jersey, New York, and Pennsylvania. Leveraging these funds, 11 feasibility studies, plus the preconstruction engineering and design for six projects, will be funded to completion within the Investigations account in FY 2022.

This law also provides $3 billion for construction of qualifying flood and storm damage reduction, including shore protection, projects, with $1.5 billion to be put toward projects in the four states where major disasters were declared in FY 2021 due to Hurricane Ida. The Army will use this funding, in part, to construct a total of 11 projects in FY 2022, including five in states where major disasters were declared due to Hurricane Ida, and six in other states and territories.

Additionally, Public Law 117-43 provides $868 million of Mississippi River and Tributaries funding to construct, rehabilitate and repair damages to projects, including $500 million to construct flood and storm damage reduction projects in the State of Louisiana. This funding will be used to complete two projects, continue construction of the Lower Mississippi River Main Stem Project including a significant investment in levee safety, and to complete one of the features of that project in FY 2022.

Inland waterways
The funding for several inland waterway projects is a welcome boost to the barging industry, as well as others that both rely on and support it.

Additionally, as part of NESP’s ecosystem restoration component, a fish passage at Lock 22 is funded at $97.10 million to complete the design and to initiate construction.

Additional details regarding the amounts provided to various programs, projects and activities for each of the five appropriations accounts for FY 2022 may be found here.