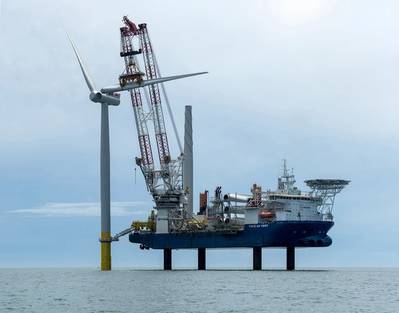 The U.S. Senate on Friday passed the National Defense Authorization Act (NDAA) for fiscal year 2021, a massive $741 billion defense bill setting policy for the Pentagon. Importantly for the U.S. offshore and maritime industries, the bill includes an amendment ensuring full enforcement of the Jones Act and other federal laws in offshore wind development.

The legislation passed the Senate by a vote of 84-13 and now heads to President Donald Trump’s desk for his signature following overwhelming 335-78 veto-proof House passage on December 8. The bill is expected to be enacted into law this month.

Included in the bill is an an amendment that clarifies that the Outer Continental Shelf Lands Act, the 1953 law governing all offshore mineral and energy development, also applies federal labor, environmental and antitrust regulations to non-fossil fuel energy sources such as wind power. It will fully enforce the Jones Act and other federal laws for all offshore renewable energy production in the United States’ Exclusive Economic Zone (EEZ).

As Chairman of the House Armed Services Subcommittee on Readiness, and as an NDAA conferee, Congressman John Garamendi’s (D-Calif.) was among the select Members of Congress appointed to negotiate the final bill. Garamendi, a former Ranking Member of the Subcommittee on Coast Guard and Maritime Transportation, added the offshore wind amendment to the NDAA during conference with support from Reps. Alan S. Lowenthal (D-Calif.) and Elaine G. Luria (D-Va.) to support American workers and domestic shipbuilding.

The U.S. has an opportunity to accelerate offshore wind energy growth, and benefit from 28 new gigawatts of wind power and $1.7 billion in U.S. Treasury revenue by 2022, according to a recent study. Apart from the benefits to the Treasury, the offshore wind industry in the U.S. could create 80,000 jobs annually from 2025 to 2035.

“My commonsense amendment simply clarifies that all existing safeguards governing offshore oil and natural gas extraction also apply to the offshore wind industry. This will enable American workers to support offshore wind development and provide a critical economic stimulus for our nation, with construction on the first major offshore wind project in federal waters set to begin as soon as next year,” Garamendi said.

“As the former Ranking Member of the House Subcommittee on Coast Guard and Maritime Transportation, I know how essential American mariners are to our economy and national security. When enacted, my amendment will allow American workers and U.S.-flagged vessels to help build the offshore wind projects needed to transition our nation to a clean energy economy. I expected this policy to become law this year,” Garamendi said.