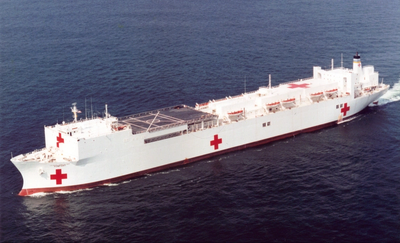 As tensions with Venezuela mount, the United States is planning to announce on Tuesday the deployment of a military hospital ship to the region, U.S. officials say, in the latest sign of the Pentagon's limited, and targeted, involvement in the crisis.

The officials, who spoke on condition of anonymity, did not specify where in the region the ship would travel to. Last year, a hospital ship -- the USNS Comfort -- cared for Venezuelan refugees and others as it stopped in Colombia, Peru, Ecuador and Honduras.

The U.S. military's Southern Command, which oversees U.S. forces in Latin America, did not immediately respond to a request for comment.

The United States and some 50 countries recognize Guaido as the legitimate head of state.

Republican Senator Lindsey Graham has called for the deployment of a U.S. aircraft carrier, something critics say is tantamount to threatening U.S. military intervention to topple Maduro.

President Donald Trump has invested considerable political capital in the diplomatic and economic intervention in the Venezuela crisis. But he has not signaled an intent to use military force.

Acting U.S. Defense Secretary Patrick Shanahan, however, stressed last week that the Pentagon has been planning a full range of military options.

The announcement of the hospital ship's deployment would come the same day that U.S. Vice President Mike Pence was expected to offer new incentives to Venezuela’s military to turn against Maduro, responding to an attempted uprising that fizzled out last week.

In a speech at the State Department scheduled for 3:25 p.m. (1925 GMT), Pence will also warn that the United States will soon move to impose sanctions on 25 additional magistrates on Venezuela’s supreme court, a senior administration official said.

Pence will also offer assistance for refugees who have fled the country, and an economic aid package contingent on a political transition, according to the official.

Maduro - who has said Guaido is a puppet of Washington - has sought to show that the military remains on his side, but opposition leaders and U.S. officials have said that support is tenuous.