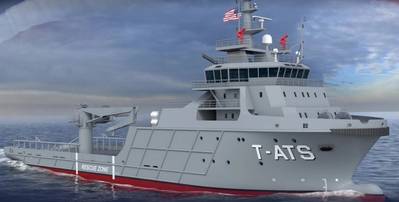 Cherokee Nation is the second ship of the Navy's Navajo class of Towing, Salvage, and Rescue vessels.

According to a press note from the Navy, the keel laying ceremony formally marks the start of a ship's life and the joining of the ship's modular components. The keel serves as the symbolic backbone of the ship.

During the ceremony, the keel authenticators etched their initials into the keel plate and declared it to be "truly and fairly laid."

"We are honored to have so many representatives of the Cherokee Nation in attendance to celebrate this early milestone," said Mike Kosar, support ships, boats and craft program manager, Program Executive Office Ships. "The ship is critical to the operations of our fleet, and will soon sail with the pride and determination of the Cherokee people, which it is named to honor"

The Navajo-class will provide ocean-going tug, salvage, and rescue capabilities to support fleet operations. The current capabilities are provided by three T-ATF 166 and two T-ARS 50 class ships, several of which will reach the end of their expected service lives later this year.

Navajo-class ships will be capable of towing U.S. Navy ships and will have 6,000 square feet of deck space for embarked systems. The platform will be 263 feet long, have a beam of 59 feet, and can carry a load of nearly 2,000 tons.

As one of the Defense Department's largest acquisition organizations, PEO Ships is responsible for executing the development and procurement of all destroyers, amphibious ships, sealift ships, support ships, boats, and craft.