US Says Iran Responsible for Drone Attack on Tanker 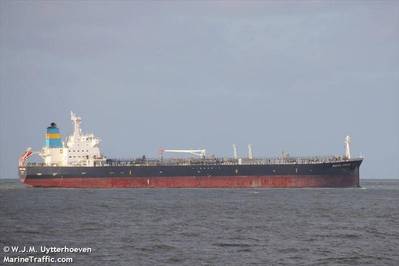 An attack on a tanker off the coast of Oman on Tuesday was carried out by an Iranian-made drone, U.S. Central Command said in a statement, adding that a multilateral maritime operation led by a British Royal Navy frigate had responded to the area.

An Israeli official had blamed Iran for the strike on the Pacific Zircon tanker managed by Israeli-controlled Eastern Pacific Shipping. The company said there was minor damage to the hull but no injuries or spillage of the gas oil cargo.

A White House official earlier said the United States was "confident that Iran likely conducted" the hit using an unmanned aerial vehicle. Iran's Nournews, which is affiliated with the country's top security body, blamed Israel for the attack.

U.S. Central Command said in a statement late on Wednesday that debris "reveals that it was a Shahed-series one-way attack drone" that hit the vessel, identifying it as Iranian-made.

"This unmanned aerial vehicle attack against a civilian vessel in this critical maritime strait demonstrates, once again, the destabilizing nature of Iranian malign activity in the region," the Central Command statement said.

It said a multilateral operation responded to the scene led by the British Royal Navy's HMS Lancaster. U.S. Navy guided-missile destroyer USS The Sullivans and a U.S. Navy patrol coastal ship and patrol craft were involved in the operation.

Attacks on tankers in Gulf waters in recent years have come at times of heightened regional tensions with Iran.

In July 2021, a suspected drone attack off Oman's coast hit a petroleum product tanker managed by an Israeli firm. Iran denied the accusations that it was responsible.

Crew fatigue led to an offshore supply vessel striking an oil and gas production platform in the Gulf of Mexico in 2021,…