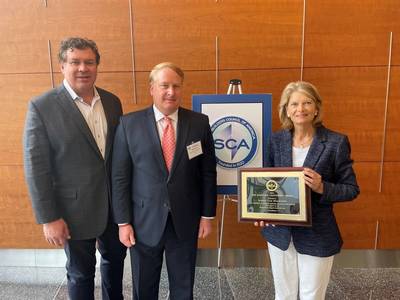 The award is given each year to national leaders or elected officials who demonstrate exemplary dedication and support for the nearly 400,000 men and women who serve in America’s shipyards and throughout the domestic industrial base.

“Throughout her time in public office, Sen. Murkowski has been a staunch advocate for the entire American maritime industry and especially for the hundreds of thousands of hardworking men and women who design, build and maintain our domestic fleet,” said SCA President Matthew Paxton. “Hailing from the Last Frontier, Sen. Murkowski knows firsthand the value of a strong maritime sector to our national defense and transport of commerce, and this award recognizes her unparalleled leadership and significant contributions to our industry in Alaska and across America.”

Sen. Murkowski sits on the U.S. Senate Appropriations Committee, where she has advanced policies to strengthen investments in Navy force structure and Coast Guard shipbuilding programs as well as building a new full fleet of arctic security vessels like the polar icebreakers.

“Since our nation's founding, in times of conflict and peace, U.S. shipyards have built and maintained the vessels that protect America’s coastlines and waterways, carry the brave men and women of the U.S. military, and secure the movement of domestic and international commerce,” said Sen. Murkowski. “The current geopolitical situation in Ukraine and persistent security threats from China demonstrate the need for Congress to prioritize investments into expanding the fleet of the future, particularly building out a robust fleet of polar security cutters. We must ensure our military is positioned to respond to the increased demand for their services as the maritime theater gets increasingly complex. It’s an honor to be recognized with this year’s Maritime Leadership Award and will continue to be a vocal advocate for these essential national defense programs.”